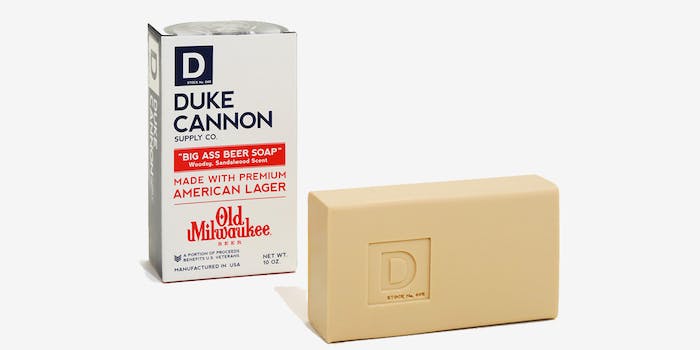 This gives whole new meaning to a shower beer.

The verdict is in: there’s nothing more relaxing than a beer while you shower. But now there’s something slightly cooler than the traditional shower beer. It’s called beer-infused soap (yeah, that’s really a thing). And it’s because beer is for more than just relaxin’ after a day of hard work.

Beer, surprisingly enough, is actually beneficial for your skin. The elements found in beer are scientifically proven to contain therapeutic properties. Among these, beer helps maintain a healthy pH level and even fights off acne. But in reality, who would want to pour beer all over themselves in the name of skincare? Alcohol makes for some pretty stenchy suds.

Well, that was the case until Duke Cannon developed the Big Ass Beer Soap. Which is exactly what it sounds like: a big ass bar of beer-infused soap. It contains all the beneficial properties of beer, without all the stank. Instead, the beer soap smells like the memories of summer, also known as sandalwood.

To make matters even better, a portion of the proceeds for this soap benefit United States Veterans. The 10-ounce bar is available through BoxLunch for just under $8 (regularly $10).