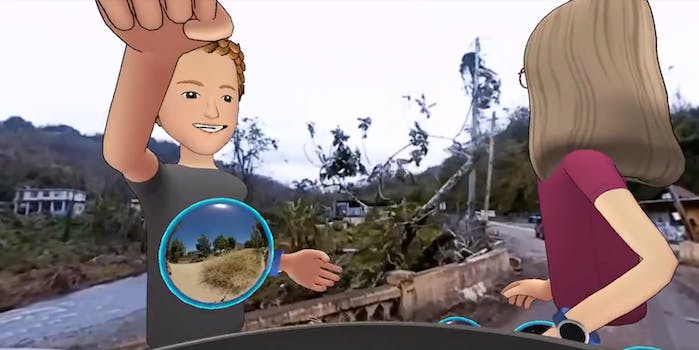 People are calling him a "heartless billionaire."

What started as a livestream showing off Facebook’s virtual reality (VR) efforts is quickly becoming a PR nightmare.

Mark Zuckerberg is getting slammed for appearing as a VR cartoon in Hurricane-ravaged Puerto Rico on Monday, with some users labeling him a “heartless billionaire” and “tone-deaf.”

The CEO’s Nintendo Mii-like avatar appeared next to Rachel Franklin, the head of Facebook’s social VR team, as they navigated the island’s flooded streets promoting their Spaces app. Things started to go downhill when it appeared Zuckerberg forgot the name of the hurricane that hit Puerto Rico in September, “You get a sense of some of the damage here that hurricane…the hurricanes have done.”

Then, instead of focusing on the humanitarian efforts taking place in Puerto Rico and the additional support its citizens need, Zuckerberg went straight into talking up VR.

Live from virtual reality — teleporting to Puerto Rico to discuss our partnership with NetHope and American Red Cross to restore connectivity and rebuild communities.

“And one of the things that’s really magical about virtual reality is you can get the feeling that you’re really in a place,” Zuckerberg said.

At one point in the livestream, Zuckerberg gave Franklin a high five as their grinning animated bodies floated above a flooded street in front of the shell of a home. That was followed by awkward dialogue, with both members failing to describe the horrific scenes surrounding them.

“Crazy to feel like you’re in the middle of it.”

“Alright! Well, do you want to teleport somewhere else?!”

The two digital presenters then teleported to the picture-perfect stage of its upcoming Oculus Connect 4 conference, a stark contrast to the conditions in Puerto Rico.

There are more than 50,000 comments on the livestream, showing a mix of gratitude toward Zuckerberg for creating Facebook, anger at him for selling ads to a Russia troll farm, and astonishment at the insensitivity of the VR stunt.

“Can’t let a good tragedy go to waste. He has to promote Facebook. Typical. All he talks about [is] Facebook instead of victims and their suffering,” one comment said.

“You can always rely on Facebook to promote sales on something from someone,” another read.

Publications have also hit out at the CEO. Matthew Hughes of the Next Web said the stunt was the “height of tastelessness” while Tom McKay at Gizmodo called it a “tonal mess resembling nothing more than rubbernecking and disaster tourism.”

Most people know VR as a technology for immersive gaming, but it’s also described by industry analysts as an “empathy machine,” capable of transporting people to remote parts of the world to see how others live. The idea is that it will create an emotional experience that can shift policy and behavioral changes.

That may have been what Facebook was aiming for when it chose to set Puerto Rico as its VR backdrop. Unfortunately, Zuckerberg and Franklin failed miserably.

Update 4:23pm, Oct. 10: On Tuesday afternoon, Mark Zuckerberg apologized to those who were offended by the virtual reality demo.

“One of the most powerful features of VR is empathy,” he wrote in a comment on the original post. “My goal here was to show how VR can raise awareness and help us see what’s happening in different parts of the world. I also wanted to share the news of our partnership with the Red Cross to help with the recovery. Reading some of the comments, I realize this wasn’t clear, and I’m sorry to anyone this offended.”

He later said Facebook would work on extending empathy to people viewing VR in 2D after a user suggested using real faces instead of virtual characters.

“I hear that. When you’re in VR yourself, the surroundings feel quite real. But that sense of empathy doesn’t extend well to people watching you as a virtual character on a 2D screen. That’s something we’ll need to work on over time,” Zuckerberg wrote.