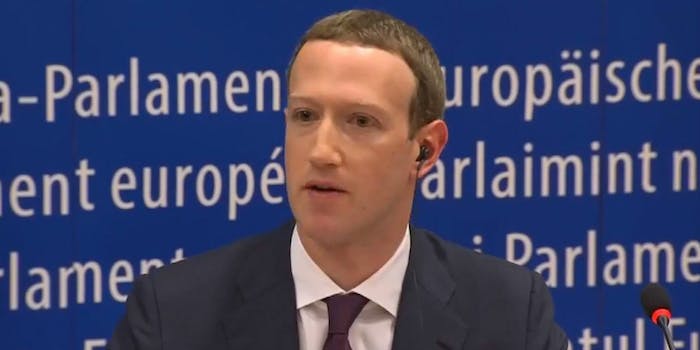 Mark Zuckerberg’s E.U. testimony was a huge waste of time

Mark Zuckerberg testified before members of the European Parliament today in what amounted to little more than a replay of previous hearings let down by an even more flawed format.

If you tuned in to the 10-hour marathon session before the U.S. House Energy and Commerce Commission and Congress last month, then there’s not much to know about what Zuckerberg told lawmakers in Brussels on Tuesday. Like those hearings, the Facebook CEO expertly weaved his way through pressing questions on important topics from privacy to abuse.

Criticism shouldn’t be aimed at the lawmakers’ questions, which were arguably more relevant than those asked by their U.S. counterparts. The real problem came down to formatting. About a dozen members of parliament spoke one after the next, asking questions and voicing their concerns for around 30 minutes. By the time they had finished, Zuckerberg, perhaps to his benefit, had little time remaining to answer them all. The expectation, it appeared, was for the CEO to jot down or somehow remember dozens of specific questions so he could answer them all at once.

What happened instead left some parliamentary members enraged as many of their inquiries were left unanswered. Instead, Zuckerberg addressed certain themes—fake news, abuse, and election interference—brought up in the tough questioning and gave vague answers, many of which we had already heard on Capitol Hill.

He began, as he did in the previous testimonies, by apologizing and admitting Facebook didn’t take a broad enough view of its responsibilities. He addressed privacy warnings by repeating rehearsed lines about the changes coming to the platform and the strict rules he’s enforcing on advertisers.

On apps misusing data, Zuckerberg gave statistics released by Facebook last week and said it would take “months” to investigate “thousands” of other apps.

Addressing questions about hate speech and bullying, Zuckerberg admitted Facebook would “never be perfect” on purging its site of harmful content. He also threw in a few lines about how the social network is using advanced AI to proactively go after posts that violate policies, rather than waiting for people to flag violations, like he did in Facebook’s dorm room days.

This brave new world of Mr #Zuckerberg in which tens of thousands of #Facebook employees decide what is fake news and what is not, scares me. This is a public task for the public authorities.

The best moment came when a Belgian Member of the European Parliament, Guy Verhofstadt, asked what sort of legacy Zuckerberg wanted to leave after comparing him to Steve Jobs and Bill Gates.

“You have to ask yourself: How you will be remembered as one of the big internet giants, together with Steve Jobs, I should say, and Bill Gates, who have enriched our world and our societies? Or on the other hand, the fact that a genius would create a digital monster that is destroying our democracies and our societies. That’s a question you have to put for yourself,” he said.

Zuckerberg left with 7 minutes of a 75 minute hearing to answer the best part of 100 often rambling questions. Zero pressure to answer any of them. This isn't what democratic accountability looks like.

But a direct response was never given. The session, which was only scheduled for an hour and 15 minutes, had already run late when Zuckerberg, having only addressed a few major themes, cut himself short.

“I want to be sensitive to time because we are 15 minutes over the scheduled meeting,” he said. “I realize there were a lot of specific questions I didn’t get to specifically answer. I think I was able to address the high-level areas in each. I’ll make sure that we follow up with each of you afterward to make sure your specific questions get addressed, and we’re going to have someone come to do a full hearing to answer some of the technical questions.”

Before he could finish his statement, Zuckerberg was cut off by Jan Philipp Albrecht, a German Greens and European Free Alliance MEP who asked about the separation of different services owned by Facebook.

His question was quickly followed by Philippe Lamberts, a Belgian parliament member, who said “I asked you six yes or no questions and I got not a single answer. You asked for this platform for a reason.”

The outcry continued as numerous politicians voiced their frustration at the formatting of the hearing and the lack of answers to a barrage of pointed questions. Zuckerberg paused, waiting for a lifeline. Eventually, it came in the form of Antonio Tajani, the chairman of the European Parliament, who defended Zuckerberg for coming to the hearing and blamed a short schedule for why a majority of questions weren’t answered.

The bizarre hearing closed with Tajani assuring parliament members that Zuckerberg and his team would get back to their specific questions in writing at a later time. In the end, Zuckerberg survived another round of tough questioning, while everyone in the room—and around the world—waited for answers.