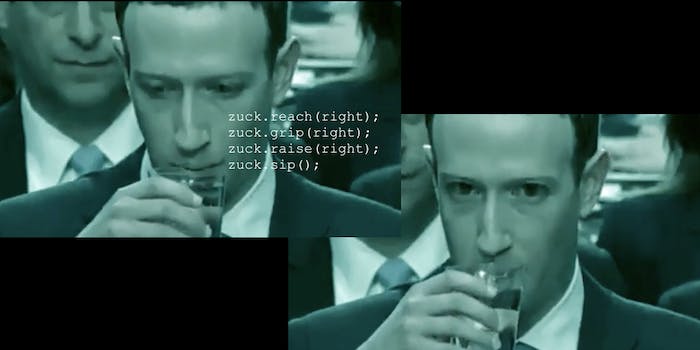 What started as a meme has snowballed into something much larger—and much sillier.

A puzzling and hilarious Change.org momentum is creeping closer to its goal of 50,000 digital signatures. Redditor PropertyOfMatter started a petition to rename “water” “Zucc juice,” and it now has more than 42,000 supporters.

Unlike many petitions which contain lengthy explanations of the cause at hand, this petition’s description is quite simple.

“The Zucc is a big boye in modern history. Support robots’ rights and honor him,” the petition reads. Naturally, this petition—and the idea of “Zucc juice”—gained notoriety on Reddit.

The name “Zucc juice” first started gaining popularity during Mark Zuckerberg’s testimony before Congress last month over Facebook’s role in the Cambridge Analytica scandal. A number of memes cropped up during and after the hearings, including a GIF insinuating Zuckerberg was a robot: the clip shows Zuckerberg drinking water alongside faux code dictating his actions.

A variety of other “Zuckerberg drinking water” jokes and memes got passed around. This eventually led to Redditor PropertyOfMatter to jokingly create a Change.org petition calling for water to be renamed “Zucc juice.” According to KnowYourMeme, the petition gained 20,000 supporters by April 20. (The name “Zucc” is a combination of Zuckerberg’s nickname “Zuck” and “succ.”)

If the petition reaches its 50,000 signature count, it’s highly doubtful that anything will come of it beyond some back-patting and congratulations on Reddit. Still, it may mark a significant victory for the popularity of niche internet memes—and perhaps a mark of general opinion on Facebook’s CEO, as well.

After originally blowing off requests by the U.K.’s parliament to testify before its committee investigating online disinformation, it appears that Zuckerberg will in fact head to Europe to testify after all. If this hearing is also live-streamed, we’ll be sure to get a new rash of GIF and meme-fodder—and perhaps some additional support for this bizarre Zucc juice thing.