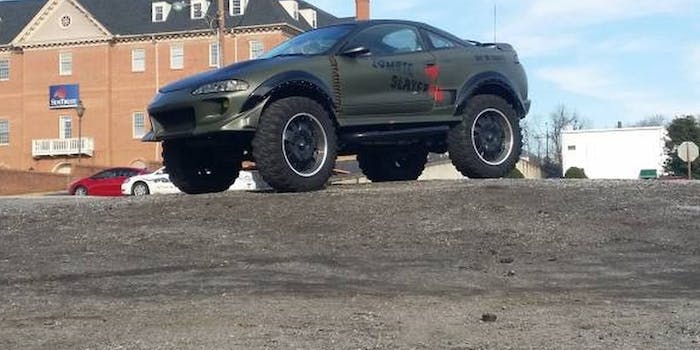 You can buy this zombie-slaying apocalypse buggy for just $3,000

You can never be too prepared.

The chances of a zombie apocalypse occurring are pretty slim, but it’s a good idea to be prepared regardless. This custom “Zombie Slayer” 4×4 is one way to ensure that you’ll always have a warm, fuzzy feeling of safety, even if the undead begin roaming your neighborhood. Once upon a time, this impressive monstrosity was a 1995 Mitsubishi Eclipse, but it’s practically unrecognizable now. The vehicle  underwent extensive modifications, including a 4-inch lift on a frame from a 1980s Nissan, a new exhaust system, a military-themed paint scheme, window guards, fender flares, and a generous helping of (unfortunately fake) weaponry. Perhaps most importantly, the original motor has been sent to the grave in favor of a Chevrolet V8 small-block. The new mechanical heart pushes power to four massive tires sitting on 22-inch rims, with plenty of fender clearance for all the random zombie body parts you’ll be cruising through. The best part? You can score this eye-catching, apocalyptic road warrior for the remarkably reasonable price of just $3,000. The vehicle, which currently lives in South Carolina and is listed for sale on Craigslist, isn’t entirely without its drawbacks. The seller warns that the car has some battery issues due to an unidentified power draw. In other words, the battery dies frequently and needs to be jumped. But if you buy the car, the seller will throw in a large battery charger.

Oh, and the tires randomly go flat every week.

These are exactly the issues you want to experience in a vehicle that’s supposed to spirit you away from a horde of zombies.