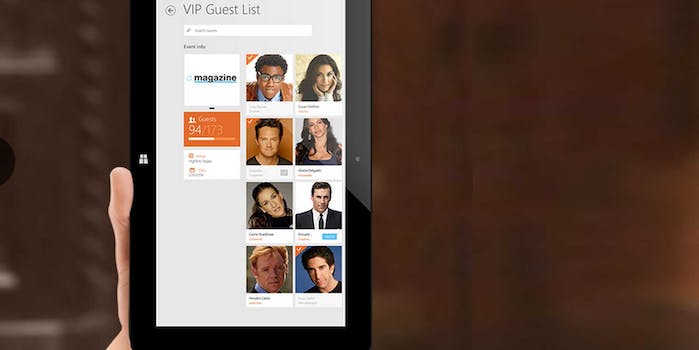 This app is the enemy of party crashers everywhere

You could always try slipping the bouncer a $20...

Party crashers have developed a host of techniques to surreptitiously enter soirees (see: Wedding Crashers) but the one thing all of these devious plans require is that the people in charge think you are supposed to be there.

But an app called zKipster is making it a lot harder to schmooze past velvet ropes. ZKipster allows event hosts to manage their guest list digitally, and zFace, the company’s new feature, uses the Internet to match names on guests lists to online photos. 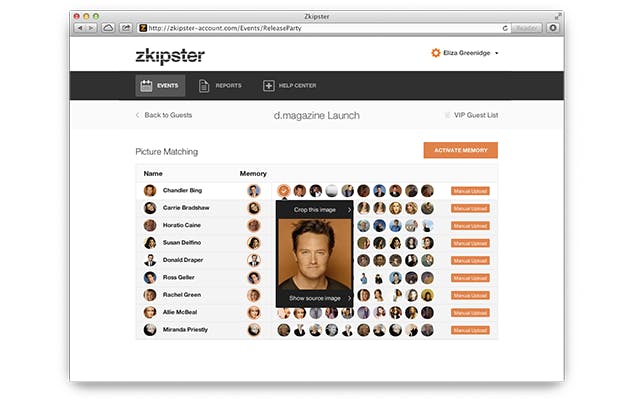 “We’ve used it from everything to small dinners and luncheons to large cocktail parties,” a source from PR firm Nadine Johnson & Associates told the Daily Dot. “Most recently it was used last night at the NYFW celebration for Alexandre Birman at MoMa, which included a list of about 600 guests.” A look at zKipster’s Instagram account can give you an idea of that other amazing parties (you weren’t invited to) that it’s been used at.

It works like this: event hosts pay for Zkipster, which works online and offline on Apple and Windows tablets (Android is on its way this spring). Guest list names are stored in a cloud and synced between devices. ZFace searches Bing to pull up photos for the names on the guest list. Zkipster started in Switzerland, which makes sense, since it’s an app to make fancy parties more exclusive, and nothing says “impeccable yet not interested in mingling with lower classes” than rich Swiss people.

The burning question, though: Why Bing? David Becker, zKipster found says the team works closely with Microsoft. “In summer 2013, we launched zKipster’s Windows 8 app because we believe in the future of that platform. We didn’t say no to Google, we chose Bing for zFace because it just made a lot of sense for us.”

In other words, there’s a partnership there, and it’s kind of admirable that Becker believes in the Windows 8 platform when the general conversation surrounding the OS is a very skeptical one. Zkipster: strangely loyal, even if it helps people kick you to the curb.

We were also curious about how accurate the Bing photo match-ups are. It would be awkward, after all, if Michael B. Jordan showed up for an awards show and the app had accidentally pulled up a picture of Michael Jordan. Or if a bouncer accidentally typed in “Duke of Majorca” but they really meant “Duke of Minorca” and then some fictional Spanish dignitary was accidentally excluded. But the matching process is manual, so the guest list creators ultimately choose from the Bing results which person they meant to invite. For celebrities and people with big digital footprints, Becker said, the matching process is very accurate. It gets trickier when guests have common names, like John Smith, so hosts can upload their own photos if the search doesn’t pull up the right person.

New York Fashion Week was a busy time for Zkipster, but a bigger event is on the horizon: “The next peak will be the week of the Oscars in Los Angeles,” Becker said. So anyone with who wants to fake it as a someone with a famous name ‘til they make it in proximity of Jennifer Lawrence better work on a new plan.