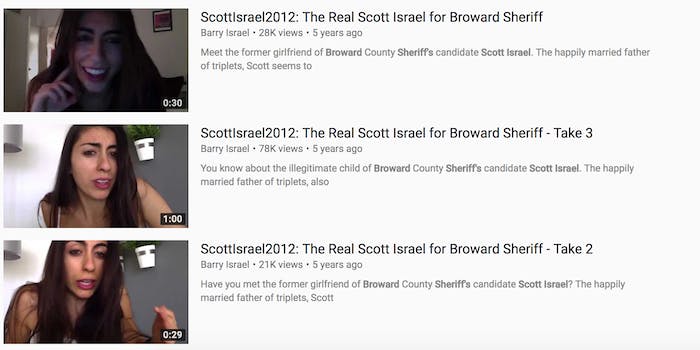 Fake videos on YouTube accuse Broward County Democratic sheriff Scott Israel of impregnating a teenager and then forcing her to have an abortion.

In the wake of the shooting in Parkland, Florida, numerous conspiracy theories hit the internet. The most popular theory—that students and gun control advocates Emma Gonzalez and David Hogg were “crisis actors”—was popularized by far-right Twitter and Facebook accounts and even became a trending video on YouTube.

But now it appears that members of the conservative movement have fallen for another string of conspiracy theory videos all on their own—and YouTube is in no hurry to take down the fake news from its website.

Broward County Democratic Sheriff Scott Israel has been assailed as everything from a “rapist” to a philanderer to a crooked cop over the past month thanks to three 5-year-old YouTube videos in which a mystery woman accused him of impregnating her when she was 17 and forcing her to get an abortion, according to Politico.

Israel—who led the police response to the Parkland shooting—has become one of the far-right’s most recent scapegoats, with conservatives blaming Israel’s “negligence” for the violent events. The Florida Speaker of the House sent a letter co-signed by 73 Republicans that called on Florida Gov. Rick Scott to suspend Israel for “malfeasance, misfeasance, neglect of duty [or] incompetence,” because the police missed and ignored multiple warning signs from shooter Nikolas Cruz.

The videos, which have been viewed almost 130,000 times since the Feb. 14 shooting, helped further the conservative message of Israel’s misdeeds.

But the videos are all fake, according to the woman and her attorney Yechezkel Rodal.

“I was paid to say these things. I didn’t even know what I was saying,” the woman anonymously told Politico. “I’m sorry … It’s fake.”

The woman said she was 17 at the time and didn’t know Israel when an unknown person paid her $25 per video on the website www.fiverr.com, where she was hired by different companies to make video testimonials for various products.

The videos were initially posted at the end of a 2012 campaign when Israel defeated Republican incumbent Al Lamberti—presumably as part of a smear campaign. Now, they’ve been circulated amongst conservatives after the shooting. A Feb. 19 Gateway Pundit piece promoted one of the phony videos in a story headlined “Broward County Sheriff Accused of Having Affair With 17-Year-Old Girl, Forcing Her to Get Abortion,” which launched the fake videos into virality on Twitter.

Upon learning about the damage done by her actions, the woman has attempted to have the videos removed from YouTube to no avail. It doesn’t appear to bother YouTube or its parent company, Google, that these fake videos now have accrued roughly 129,000 page views after the shooting. Of the 560 comments cumulatively attached to the three YouTube videos, only 12 were made before the shooting.

“Now that these bogus, fake videos have been debunked we would ask that YouTube comply with our previous request (going back to 2012) and take them down!” Israel’s campaign manager Amy Rose said in a statement. “It’s too bad that the young woman who was paid to repeat these lies can’t identify the person who paid her to do so.”

When asked why the videos haven’t been removed by Politico, Google responded with a blanket statement.

“YouTube has a built-in privacy complaint process, and we encourage people to let us know if videos or comments on the site violate their privacy,” they wrote. “We may remove videos after receiving privacy complaints, which we review on a case-by-case basis.”