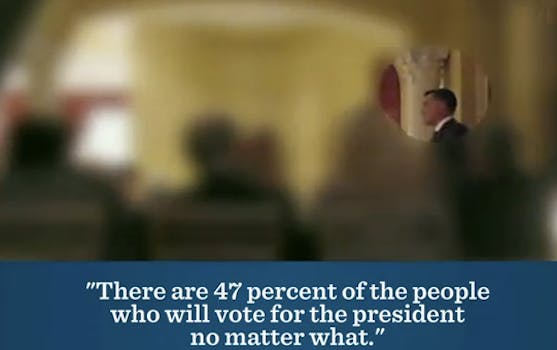 Obama and Romney were caught on tape saying some things that haven't gone over well.

If there was one thing Mitt Romney and Barack Obama might agree on this week, it’s that they would both be all right with YouTube’s servers going down. That’s because YouTube has become a hot bed of attack and hidden-camera videos this week, and some have said those videos may change the race for the White House.

The first series of videos was from a Romney fundraiser in May, where the former Massachusetts governor said, “There are 47 percent of the people who will vote for the president no matter what.” He went on to tell attendees at the private dinner that almost half of the country had no interest in helping themselves. Mother Jones posted the videos Monday, and all of the clips had received thousands of views within hours. One clip, the now notorious “47 percent” moment, had over 2 million views.

It didn’t take the Obama camp long to pounce on the unscripted moment. On Tuesday, the Chicago-based campaign used a tactic it unleashed on John McCain four years ago when he couldn’t remember how many houses he owned. Armed with an iPad, an Obama volunteer showed the clips of Romney to voters and recorded their reactions.

The video was viewed almost 20,000 times by Tuesday night and was generally well-received by viewers.

But it wasn’t all good news for the president on YouTube. Just as Romney was taking fire for the remarks from May, the Drudge Report had linked to a 1998 video of Obama saying he “actually believe in redistribution.” Thanks to Drudge, the video went viral; views were frozen at 313 for a time but were approaching 193,000 on Wednesday morning. Just with any video in our polarized political world, it was well-received by those who don’t support the president.

“Everyone has known by now that Obama is a Marxist. It’s very clear in the way he speaks, and the policies that he proposes. It should be no secret now, anyone who doesn’t acknowledge by now is just simply lying to themselves, because all of the proof is there,” wrote PauLWaFFlez.

“When Joe the plumber spoke in 2008 people should of listened,” wrote leftwingwacko.

Nick Cruz, who apparently joined YouTube this week, posted the video. The clip was the user’s only upload.

All of the clips showed just how much something as simple as a YouTube video can affect the race. And the most notable thing was that it was not major mainstream media outlets that released these videos, but rather smaller forums using the power of social media and YouTube.