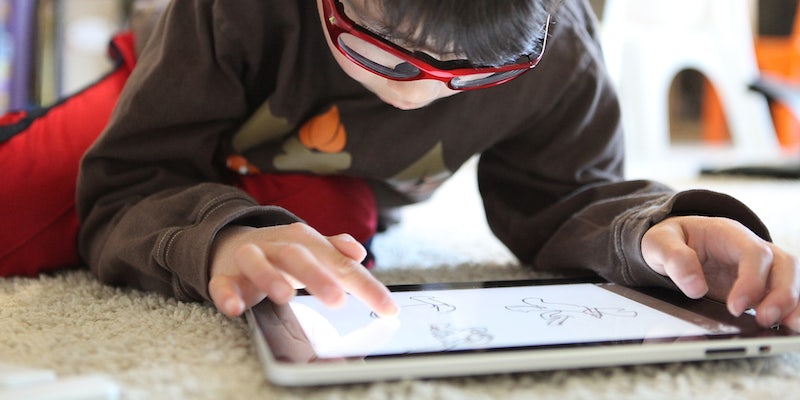 Won't somebody think of the children?!

A coalition of online privacy groups is putting pressure on the Federal Trade Commission to crack down on YouTube Kids, a Google app designed to make the experience of using its popular video platform friendly for the under-13 set.

Despite these safeguards, the app has drawn criticism for its handling of in-app advertising. The privacy-minded consortium seeking FTC review of YouTube Kids says that the practice of directly pitching products—which is common among YouTube stars—blurs the line between entertainment and advertising content in a way that’s difficult for anyone, let alone a 7-year-old, to discern.

Back in the 1970s, the FCC passed rules prohibiting children’s television shows from directly hawking products to their viewers. The rules required a clear line of separation between commercials and programming. The FCC acted after numerous studies showed that young children had a great deal of difficulty determining what was and was not an advertisement.

These lines do not exist as clearly on YouTube, where content creators frequently incorporate paid endorsements into their programming.

In an open letter to Federal Trade Commission Secretary Donald Clark, the coalition—which includes groups like the Center for Digital Democracy, Campaign for a Commercial Free Childhood, American Academy of Child and Adolescent Psychiatry, and Public Citizen—argued that YouTube Kids videos often weave commercial content into programming in ways that would be prohibited on TV.

The letter also warned that the producers of videos endorsing toys and games often failed to disclose their financial relationships with the products’ manufacturers.

“This blending of children’s programming content with advertising material on television has long been prohibited because it is unfair and deceptive to children,” the groups wrote. “The fact that children are viewing the videos on a tablet or smart phone [sic] screen instead of on a television screen does not make it any less unfair and deceptive.”

One example of this lack of separation: When a user clicks on the “My Little Pony Official” channel, two of the four videos that appear are commercials for the My Little Pony show that airs on Hasbro‘s cable channel, Discovery Family.

“This example illustrates two different violations of the separations principle,” the complaint reads. “First, the ‘shows’ page intermixes noncommercial and commercial offerings in such a way that children would not be able to identify which ones are ads. Second, for children old enough to read, the manner in which the commercials are presented on My Little Pony Official on YouTube Kids violates the separations principle by labeling commercials as ‘TV clips.'”

The groups also targeted “unboxing” videos, in which people open up a new game or toy and comment on both the product and the unboxing process. Unboxing videos are shockingly popular, especially among kids. During a single week last July, one YouTube channel filled with nothing but Disney product unboxing videos racked up 55 million views.

Children’s advocates in the coalition insist that YouTube Kids should remove unboxing videos from the app because they are essentially commercials for the products being unboxed. They also claim the videos violate an FCC rule prohibiting the host of a kids show from directly endorsing a commercial product or service

In a statement to the San Jose Mercury News, Google defended YouTube Kids, calling it a safe and educational environment.

“When developing YouTube Kids, we consulted with numerous partners and child advocacy and privacy groups,” a Google spokesperson told the paper. “We are always open to feedback on ways to improve the app.”

Photo via Marcus Kwan/Flickr (CC BY 2.0)

Correction: The story originally identified Hasbro’s cable channel as The Hub. That was the channel’s original name, but it has since been rebranded as Discovery Family.