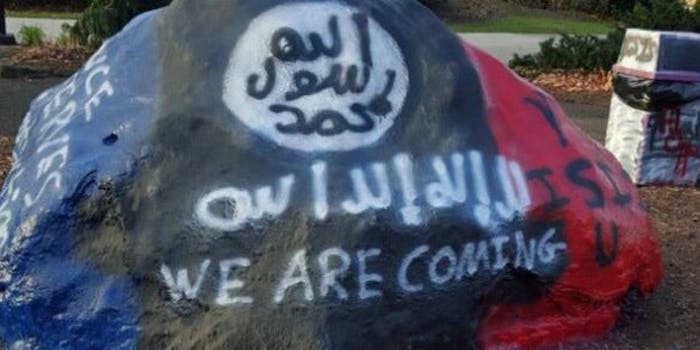 Quickly, officials and students painted over them.

With the world on edge after the Islamic State‘s destructive attack in Paris and with subsequent video threats being made, it’s not particularly useful or humorous for people to prank an entire society by spraypainting pro-Islamic State messages in public. And if it’s not a prank, then, there might be bigger issues at play.

Either way, Youngstown State University in Youngstown, Ohio, is on edge after boulders on campus were discovered Monday with pro-Islamic State words.

Whoever did this to the rock needs expelled. ISIS is not some joke. Terrorism is not a joke. @OnlyAtYSU pic.twitter.com/cwusAqDNMW

But Youngstown State was quick to tweet the following.

YSU Police are investigating messages found on the rock on campus. No threats have been validated; no credible threat to campus at this time

Fox 8 in Cleveland reported that the university notified the FBI as a precaution. A Youngstown State spokeswoman said police are reviewing security cameras that were in the area.

“Unfortunately, this is the world we live in today,” Shannon Tirone, the associate vice president for university relations, told the Vindicator. “… [When the perpetrators are caught], I can tell you we won’t be lenient.”

But later Monday, students painted over the rocks with messages of support like, “God Bless America,” “United We Stand,” and “World Peace.”

In case anyone was wondering, this is what is painted on the rock at YSU. Let's share this image. #liveyoungstown pic.twitter.com/jghGRMLs44