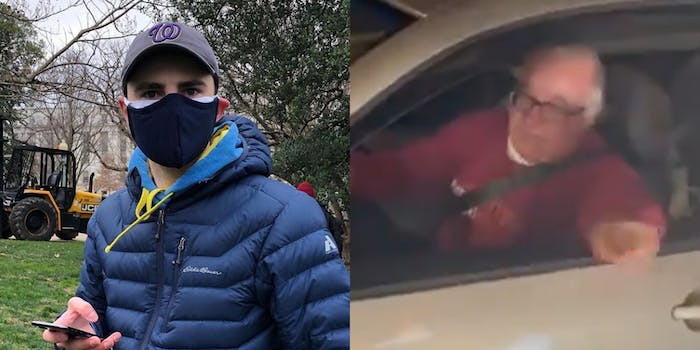 In less than two weeks, voters will choose whether Democrat Terry McAuliffe or Republican Glenn Youngkin will be the next governor of Virginia.

Emotions are running high in the final leg of the race, widely seen as a bellwether for the 2022 midterms.

“An irate Glenn Youngkin supporter just came over and punched my hand,” he wrote.

“Ah, get rid of that thing. You stupid fool,” the man says as he approaches Petrizzo in the video.

After apparently striking Petrizzo, the man waves his arms at protesters who brought a giant inflatable chicken that resembled former President Donald Trump. “You guys, go home,” he says, “Do you know of a single person who disappeared under the cover of darkness during the Trump administration?” It’s not known what disappearances he’s referring to.

Petrizzo told the Daily Dot that he wasn’t injured. Via Twitter direct message, he said the man was angry about education, specifically critical race theory. Youngkin’s campaign has attempted to capitalize on the false belief that the state’s public schools teach the theory, which examines United States’ history through a lens that includes racism.

Petrizzo also provided the Daily Dot a second video of the man driving away, shouting, “My children do not belong to the state!”

Petrizzo said the man knew that he was a reporter with Salon.

“[P]rior to the video he was very irate with a group of pro-Terry [McAuliffe] activists close to the chicken,” he said.

The video of the incident has nearly 175,000 views as of this writing. Some mocked the man; others were appalled and alarmed.

Afterwards, Petrizzo tweeted that he’d filed a police report. He also said that police had identified the man as a local resident. The Daily Dot isn’t identifying him because charges haven’t been filed, according to online court records and a clerk with the felony division.

The man didn’t respond to request for comment sent to a Facebook profile believed to belong to him. The Facebook account’s name, likeness, and city of residence matches Petrizzo’s video and the person police identified. Posts on the page criticize President Joe Biden, a local school board, and praise Trump. One post blames “liberals” because “the country wasn’t prepared” for the pandemic because they distracted Trump with investigations and impeachment.

Petrizzo believes that the episode is indicative of a larger issue.

“I would say the incident reflects a post-Jan. 6 world where increasingly politics has found itself leading to violence,” he said. “An unfortunate state of the world we live in, without question.”