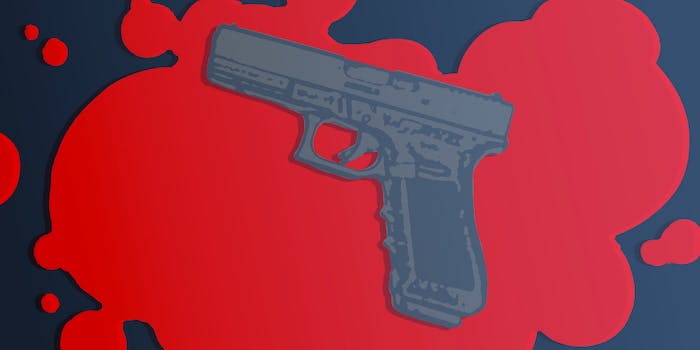 But who shot him remains a mystery.

An 18-year-old African-American man was shot near Ferguson, Missouri, on Wednesday. The shooting has torn a divide between eyewitnesses, who say he was shot by police, and law enforcement, who paint a very different picture.

Photos of the crime scene’s aftermath are being shared across Facebook and Twitter, as well as eyewitness video of his mother screaming, “They shot my son.”

But the Normandy Police Department released an official press report Wednesday evening. Officials were called to a neighborhood near the Normandy-Ferguson city line after reports of a “suicidal” man. Around 2pm CT this man “retrieved a handgun” and fired at police officers following a confrontation, according to local officials.

While officials say Normandy officers returned fire, they say the suspect did not appear to be struck. Officials said he then attempted to flee the scene and was pursued on foot. “As officers turned the corner, they observed the unresponsive male lying on the ground and rendered first aid,” the report says. He had apparently shot himself, according to the report.

I've talked to an aunt of the deceased, who confirmed his age. The eyewitness does not wish to be identified at this time.

I'm at the #Ferguson PD to ask for a preliminary report on the shooting in #Normandy and here's what I see: pic.twitter.com/oAAE5kqWgW

I asked Mr. Gibbons of #Ferguson PD for a report and he said #Normandy has it. I said I heard they shot a boy to death.

I see #Ferguson Police on a video with shots fired on Paddington.

A witness, Deron Smith, told the St. Louis Post-Dispatch that he saw the chase—he said he didn’t believe the man was holding a gun because he saw him use two hands to climb a fence.

Normandy police do not wear body cameras, according to the Post-Dispatch.

Last year, unarmed black teenager Michael Brown was shot and killed by white police officer Darren Wilson in Ferguson, Missouri, on Aug. 9, 2014. The shooting sparked the Ferguson uprising as well as brought national attention to police violence in the U.S. and Black Lives Matter, a movement that started on July 13, 2013, after George Zimmerman was acquitted in the murder of Trayvon Martin.

Update 3:51pm CT, Oct. 29: The suspect, identified as Amonderez Green, has died. According to a Normandy Police Department press release published on Thursday, a local hospital has assessed that Green came in with only one, “self-inflicted” gunshot wound.