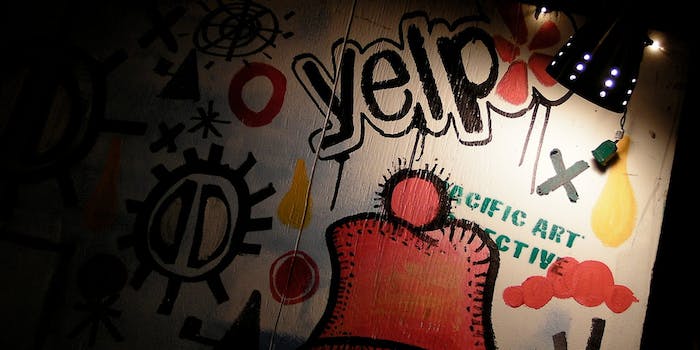 People are Yelping more than reviews.

Most of us think of Yelp as the go-to ratings and review site for restaurants and other businesses. Occasionally it’s a place to take down lion-hunting dentists and Making a Murderer lawyers, and sometimes even where people go to review their dates (not the locations).

Star-ratings might be the usual content that pops up when we visit Yelp, but if you dig a bit deeper on the site, you’ll find Yelp Talk, forums dedicated to whatever Yelpers feel like discussing. Most of it is totally innocuous—questions about the best restaurants or panic rooms in the city, but sometimes Yelpers take to Talk to ask life’s most pressing questions.

There are a surprising number of queries in Dating and Relationships forum. Apparently Yelpers’ opinions extend to the love life and activities in the bedroom. One love-stricken Romeo asked his fellow Yelp users whether or not he should marry someone 12 years his senior. Yelpers united behind “yes.”

When in doubt, ask Yelp about very important life decisions that impact you and the person you’re planning on spending the rest of your life with. Yelp users are unquestionably the best individuals to ask for legal advice, as this man found out regarding his prenup. 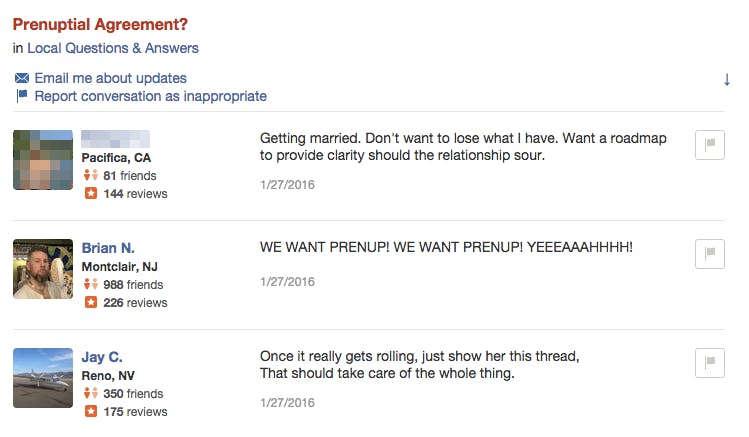 Dino K. appears to be some sort of Yelp celebrity, with the users on this particular post being “in” on the joke. I’m not sure Yelp is the best place to review people, twins or otherwise, but Dino K. has some opinions.

The forums are apparently so active that you can drunkenly post about cigarette delivery and get an immediate answer. Yelp Talk is really giving Twitter a run for its money here. The thread devolved quickly into Eminem lyrics and Vespa repairs, but Julia made sure to keep things on-topic.

You might be reviewing places on Yelp, but do you really want to go to them? Chelsea asks the hard question we all want to know the answer to but are too busy to ask. Because Netflix and your couch is always five stars.