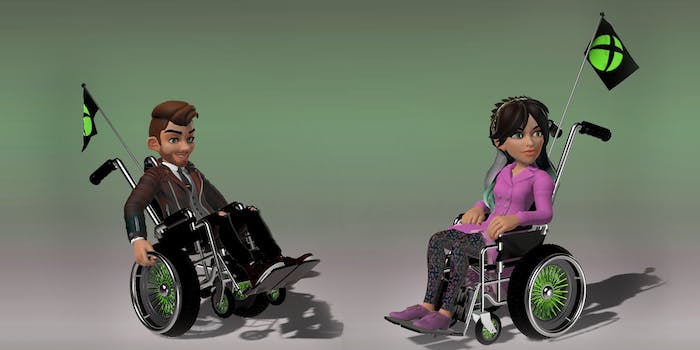 Xbox avatars will soon have an awesome wheelchair option

Xbox avatars will soon have a wheelchair option, Xbox head Phil Spencer confirmed in a tweet. The game platform’s Mike Ybarra followed up with a “sneak peek” of the avatars coming soon.

Spencer was replying to a thread discussing the lack of options for characters in a wheelchair in the Xbox system. Avatars are used on your Xbox dashboard, to add friends and personalize the gaming experience, and can be used in some games.

One user suggested starting a petition to bring wheelchair avatars to Xbox, but Spencer said the company is already working on it. Spencer and Ybarra didn’t mention a timeline for when the avatars might be available.

In the U.S., 22 percent of adults are living with some form of disability. People with disabilities are poorly represented in video games, and as one disabled gamer notes, some disabled characters receive modifications to counterbalance disabilities. In an essay for Paste Magazine, Javy Gwaltney writes that although games have become more inclusive in the years since he was a disabled young media consumer, it’s not good enough.

When you have an entire industry pumping out action games centered around muscular, self-righteous men doing vile things for the “right reasons,” you are effectively saying that this is what that culture values; it is a culture that chooses to tell that same kind of story, one that celebrates a toxic, death-obsessed, mostly white masculinity over stories about black people, about women, about disabled folks and other marginalized communities.

Reaction to Spencer’s tweet is overwhelmingly positive, as is the response to most efforts that include disabled characters in video games. When Guild Wars 2 debuted a player with a degenerative disease that limited mobility, the character inspired at least one player with multiple sclerosis who praised the game for including her.