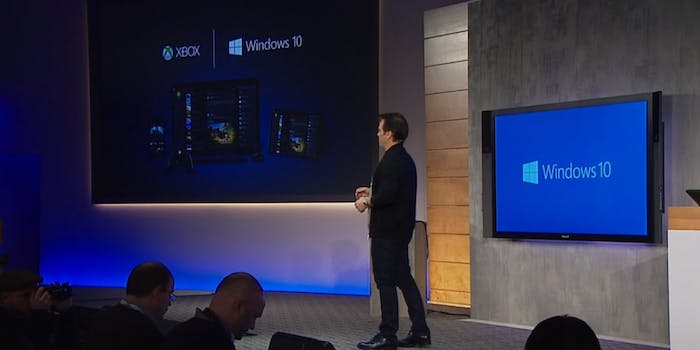 Here’s what Microsoft has planned for the future of gaming

Social integration with PCs and game streaming service will alter the Xbox landscape.

Microsoft at its Windows 10 event today announced steps to help erode the historical barrier between console gamers and PC gamers, and to extend the reach of Xbox gaming throughout the household.

Phil Spencer, head of Xbox, presented the Xbox app for the upcoming Windows 10 operating system. The Xbox app effectively creates an Xbox Live experience on PCs running Windows 10. It enables cross-platform play and communication, and adds the ability to record and share game footage using the Game DVR, which launched on the Xbox One. The new Xbox app also enables game streaming.

The Windows 10 Xbox app mirrors the Xbox Live social overlays on the Xbox One, by including a list of games recently played by friends on Xbox Live, a social feed of recent media clips shared and Xbox Achievements earned by friends, and notifications on friends’ party and online statuses. The new app will also enable text and voice messages, and voice chat between Xbox One and PCs running Windows 10.

The most important gaming-related aspect of Windows 10 may be cross-platform play, which could have huge ramifications on the life expectancy of multiplayer games. The further out a game like Titanfall gets from its release date, the more the player base dwindles, and eventually the inability to find matches kills enthusiasm for the game.

Spencer also announced that the Xbox One can stream games to PCs and tablets running Windows 10. He demonstrated the streaming function on a Surface tablet, scrolling through a list of games installed on a paired Xbox One console, and launching the racing game Forza from the tablet. Streaming functionality is coming “later this year,” according to Spencer.

The Xbox app will also enable game recording using the same Game DVR app introduced on the Xbox One. Spencer used a game session of Civilization: Beyond Earth, running on digital distribution service Steam to demonstrate how the Game DVR on Windows 10 can grab quick game clips to edit and share on Xbox Live.

Microsoft plans to share more information about the Xbox One app at the Game Developers Conference in San Francisco in March.