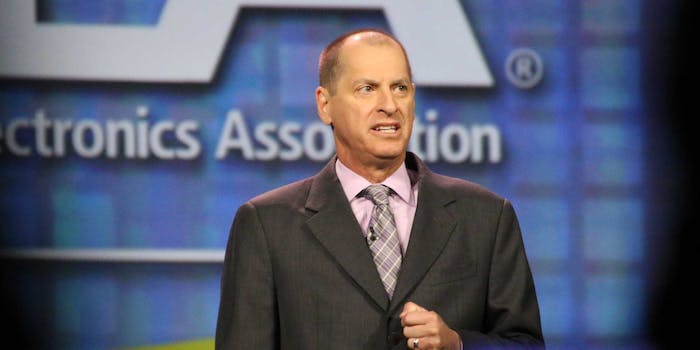 In Las Vegas, more than 160,000 attendees are ambling through the hallowed halls of CES hoping to get a glimpse at the future. Unfortunately, in 2015, the landscape of the future remains sculpted by men, for men.

At the handful of early keynotes that set the tone for the conference to come, the men on stage expressed concern for a number of emerging industry frictions, but a dialogue around diversity was nowhere in sight. Likely that conversation was reserved, comfortably, for its own time and place, at a dedicated panel, likely the small one Intel will host on Wednesday.

Update 11:16am CT, Jan. 7: During Intel’s press conference, the company pledged $300 million in a diversity initiative that seeks to achieve “full representation at all levels”—a nebulous claim that we can only hope it plans to track and quantify. It’s worth noting that this pledge is a direct response to Intel capitulating to pressure from Gamergate to pull its advertising on the gaming blog Gamasutra last October. (Forgive my skepticism. Or don’t.)

Of the six plus hours of press events I attended over the last 36 hours, a woman spoke once, during Ford’s keynote, for two minutes, probably even less. The keynote speakers were male. All of them. It’s not a surprise, but that doesn’t mean we shouldn’t talk about it.

It’s not a surprise, but that doesn’t mean we shouldn’t talk about it.

On Tuesday, President and CEO of the Consumer Electronics Association Gary Shapiro took the main stage to address thousands of show-goers about the near future of the tech industry. A few years ago, Shapiro infamously made some pretty problematic remarks around CES tradition and “booth babes”—the women who get hired at events like CES to sex up lackluster products and brands.

I waited patiently for Shapiro’s sweeping industry overview to touch on or even graze the enduring gender gap in an industry increasingly interested in monetizing women (half the population is a lucrative demographic all its own—who knew?!). Surely a woman would take the stage for more than a press-friendly cameo. It feels like more women are in attendance than ever at CES 2015, so I certainly couldn’t be the only one in the audience squirming about it.

“I’ll say it again: Innovate or die. It can be scary.”

Shapiro spent plenty of time hawking a new book called Digital Destiny, which promises to examine a future in which data solves many of our “thorniest problems.” Apparently diversity isn’t among them. He went on to fret over patent trolls and the broadband spectrum crunch, railing against the FAA and FCC and their pesky regulations getting in the way of so much noble innovation.

As usual, the consumer tech world sees no particular imperative to drag its problematic corporate culture with it into the future—or even the 21st century. Instead, Shapiro was happy to frame the industry’s amorphous tensions in black and white, us-versus-them language, taking no real interest in expanding the definition of that “us” to reflect the varied identities of the people on the buying end.

“As I look back, a lot of things have changed at CES over the years—but one thing has stayed the same,” said Ford CEO Mark Fields, who went on to talk at length about transportation and population density. Collectively, the CES keynote speakers had a lot of things to knit their brows about: healthcare, clean water, the developing world, regulatory agencies, cybersecurity, air quality, and open Internet of Things platforms.

The issue here isn’t getting women on stage (though that’s certainly one of them). It’s creating the lasting, systemic equality that means women will be a natural choice to take the stage at tech events, not an afterthought in the name of gender equality lip service.

“I’ll say it again: Innovate or die. It can be scary,” Shapiro said. “Innovation by its very nation disrupts the status quo.”

And yet, here we are.