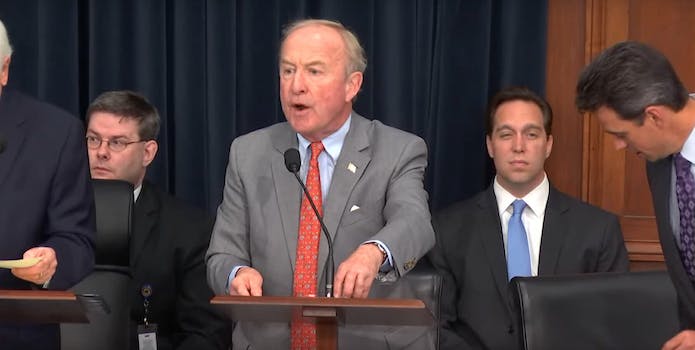 New Jersey congressman outs activist in letter to her employer

Rep. Rodney Frelinghuysen called Saily Avelenda, of West Caldwell, N.J., a 'ringleader' of an activist group in his district.

A New Jersey bank employee resigned after one of the state’s Republican congressmen wrote a letter to her employer outing her as an activist opposing his re-election.

Rep. Rodney Frelinghuysen called Saily Avelenda, of West Caldwell, New Jersey, a “ringleader” of an activist group by scribbling a handwritten message on the bottom of a fundraising letter sent to a board member of Lakeland Bank, according to WNYC.

Avelenda is listed as a member of the Steering Committee of NJ 11th For Change, a grassroots group that wants Frelinghuysen to host a town hall like many of his other Republican colleagues. The group also hosts weekly protests at his office.

In Frelinghuysen’s letter, he writes that there are “organized forces—both national and local—who are already hard at work to put a stop to an agenda of limited government, economic growth, and stronger national security” before asking for a donation two years before he is up for re-election.

At the bottom of the letter, Frelinghuysen—the chairman of the House Appropriations Committee —writes, “P.S. one of the ringleaders works in your bank!”

Avelenda, who was a general counsel and senior vice president at Lakeland Bank, told WNYC she received pressure because of her political activism and that pressure was one of several reasons she resigned from her position.

After the letter was received, Avelenda was asked about it by her boss and, while not fired, she had to write a statement to the bank’s CEO, she said.

“I thought my congressman put them in a situation, and put me in a really bad situation as the constituent, and used his name, used his position, and used his stationery to try to punish me,” she told the radio station.

“He was in no way involved in any of the bank’s business and is unaware of any of the particulars about this employee’s status with the bank,” the statement said.