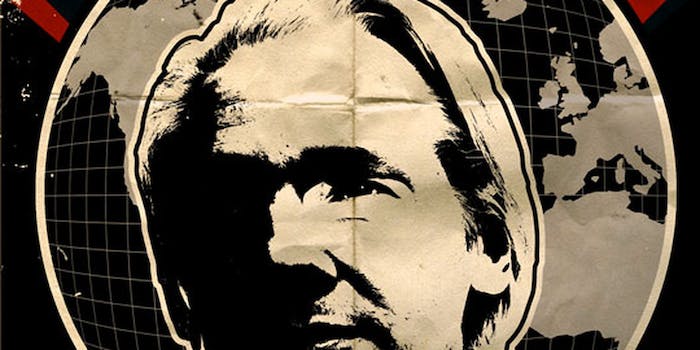 U.S.. and U.K. spy agencies were keeping tabs on WikiLeaks and its founder.

Top secret documents provided by U.S. intelligence contractor Edward Snowden have revealed that American and British spy agencies have not only targeted whistleblower organization WikiLeaks, but its supporters as well. One document, attributed to the U.K.’s Government Communications Headquarters (GCHQ), details how visitors to WikiLeaks’s websites were secretly monitored.

Other documents, released concurrently, show the U.S. government targeted the file-sharing website The Pirate Bay, which reporters claim is proof the U.S. National Security Agency frequently strays from its mandate of surveilling terrorists and national security threats. It was also revealed that Anonymous activists were also secretly targeted by the NSA.

The documents were outlined by journalists Glenn Greenwald and Ryan Gallagher in the Intercept, a digital magazine published by First Look Media, dedicated to reporting on documents obtained by Snowden.

Included in the files are new details of how the Obama administration pursued WikiLeaks editor-in-chief Julian Assange by urging foreign governments to file criminal charges against him. Assange has been granted diplomatic asylum by the Ecuadorian government and since June 2012 has remained in their London embassy, fearing abduction and extradition to the United States.

A file called the “Manhunting Timeline,” dated 2008 to 2012, is used by intelligence community to record the efforts of the U.S. government to “locate, prosecute, capture, or kill alleged terrorists, drug traffickers, Palestinian leaders and others.”  Among the targets listed in the file is Julian Assange.

“The United States on August 10 urged other nations with forces in Afghanistan, including Australia, United Kingdom, and Germany, to consider filing criminal charges against Julian Assange,” the documents revealed.

A discussion between two NSA offices is recorded in a third document published the Intercept, including the NSA general counsel and analysts with its Threat Operations Center. The document suggests that the NSA considered designating WikiLeaks as a “malicious foreign actor,” which would have allowed the agency to target U.S. citizens associated with the group.

The U.S. and British governments have claimed they do not spy on the citizens of each others countries, however, the documents released by the Intercept prove those statements are false. A powerpoint presentation published by the Intercept shows that a GCHQ system—codenamed ANTICRISIS GIRL—has been used to specifically target Americans who visited WikiLeaks’ website.

In a statement to the Intercept, Assange condemned the NSA and GCHQ for the targeting of journalists and activists: “News that the NSA planned these operations at the level of its Office of the General Counsel is especially troubling. Today, we call on the White House to appoint a special prosecutor to investigate the extent of the NSA’s criminal activity against the media, including WikiLeaks, its staff, its associates and its supporters.”

In another document released by the Intercept, titled “Discovery SIGINT Targeting Scenarios and Compliance,” includes a Q&A with the NSA’s Office of General Counsel (OGC). “I screwed up… the selector had a strong indication of being foreign, but it turned out to be US… now what,” one of the questions asks. The OGC responds that it was necessary to report the incident, “but it’s nothing to worry about.”

“The IP addresses collected by GCHQ are used to identify individual computers that connect to the Internet,” the Intercept said, “…and can be traced back to specific people if the IP address has not been masked using an anonymity service.”

The new report further highlights how the U.S. government may target American citizens who have taken steps to protect their privacy through this use of encryption products. With regards to Anonymous, analysts were told to specifically target only individuals living outside the United States, and then, only those not holding dual citizenship. Millions of activists, hackers, and average law-abiding citizens, however, legally employ various forms of online encryption, including virtual private networks (VPN), which can be used to mask their physical locations, by connecting to proxy servers occasionally located on foreign soil.

Assange told reporters that WikiLeaks is considering legal action against the United States.

“The investigations into attempts to interfere with WikiLeaks’ work will go wherever they need to go. Make no mistake: those responsible will be held to account and brought to justice,” he said.