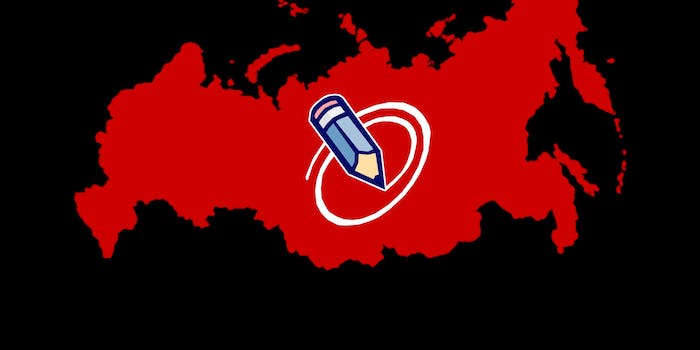 Why LiveJournal still rules in Russia

Other social networks may be faster, slicker, and more modern, but in Russia, LiveJournal remains an Internet giant.

Last week, Russian activist Alexei Navalny was arrested for politically motivated embezzlement charges stemming from his use of a social network to organize public demonstrations against President Vladimir Putin. His platform of choice? LiveJournal.

While the blogging service has withered in the U.S., due to a series of PR flubs and the rise of Facebook and Twitter, LiveJournal has remained an intrinsic part of Russian Internet culture.

It’s so popular, in fact, that LJ (??—pronounced “ZheZhe”—in Russian) has become a proprietary eponym for blogging in general. It’s a hub for grassroots reporting of current events in a country where TV is largely controlled by the government. It’s a place for political discourse, photos of unlikely people and places, and of course, plenty of cute animals pics.

While LiveJournal can’t match the speed of Twitter, the reach of Facebook, or the ease of Tumblr, Russian users remained loyal to the outdated blogging platform. Roughly half of LiveJournal’s userbase hails from Russia—an estimated 5.7 million users and 170,000 communities—and almost all of its operational management takes place now in Moscow.

As a real, childhood-in-a-snowsuit Russian, I think the appeal lies in LiveJournal’s no-frills style. It’s remained an unfaltering beacon of the sort of burlap utilitarianism that appeals to a Russian audience. In this case at least, basic is better.

But that doesn’t mean LiveJournal’s audience is satisfied.

Since its 2006 sale to Russian media company SUP Fabrik (part-owned by publishing heavyweight Kommersant), fears of corporate and governmental efforts at stifling dissent on the platform have risen in the oppression-weary nation.

“The reason (the deal) is so suspicious for us, is that some oligarch is willing to pay so much for something that is not worth so much,” then-popular LiveJournaler Yaroslav Grekov told Wired at the time. “That’s why I am thinking that Sup’s goal is not to earn, but rather to spend money for some very important reason … the destruction of our LiveJournal community, which is very organized and even dangerous to the government.”

A recent move by LiveJournal to get rid of its .ru landing page, listed all of the top Russian blogs, further frustrated users already annoyed with the service’s history of disregard for its users.

“The informational-entertaining digest LiveJournal.ru has ceased its existence. New material posted by LiveJournal editors can now be seen in the ‘Editors’ section,” LiveJournal announced June 25 on its official Russian-language blog (translation by author).

In short, while users located in Russia are directed to the same Russian content on a new homepage, those anywhere else are sent to the English version. (Users have developed a workaround: A replica of the previous .ru homepage can be accessed by filtering to Cyrillic.) The move was confusing and disappointing for many users, some of whom expressed their frustration in the comments section of the announcement.

The change was part of a larger redesign by top Russian Web design studio Art. Lebedev, which also did SUP Fabrik-owned news website Gazeta.ru. The change was supposed to be a modern update for the community: with bigger fonts and several structural changes. It had the opposite effect: The changes just highlighted how dated the service truly is.

LiveJournal’s top Russian users, however, don’t seem too concerned. Popular photo blogger Zyalt hasn’t said a word about the new look, despite being on a hiatus from his fascinating journeys around the world. Back in March, Zyalt, real name Ilya Varlamov, defended LiveJournal against the previous bout of complaints.

And all the while, Navalny has continued to use his popular account to stage demonstrations and rally the masses.

In the end, that may very well be the reason why most users stick around. So long as popular users like Zyalt and Navalny are contributing original content and commentary in the community, there’s a reason to stick around.

Without a better option that combines simple blogging with a strong community feel, it’s likely that LiveJournal will remain Russia’s primary blogging platform—unless, of course, another young idealist like Brad Fitzpatrick builds a brave new platform with free speech, not profit, in mind.