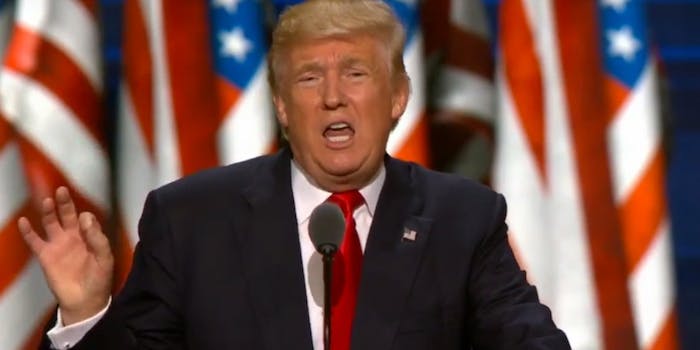 This wasn't the first time.

As Donald Trump accepted his party’s presidential nomination at the Republican National Convention on Thursday, four large screens in the Quicken Loans Arena were broadcasting a series of tweets.

However, one post in particular is garnering the attention of many.

User @Western_Triumph’s tweet seems harmless at first glance—simply quoting a line from Trump’s speech—but a closer look at the account tells a much different story.

The user’s bio features a series of slogans associated with white supremacy, including #ProWhite, #RaceRealist and #LoveYourRace. In other tweets, the account advocates for race segregation, a “great purge” of non-white “traitors,” and the deportation of Muslims to the Middle East, among other racist messages.

According to Talking Points Memo, this was not the first tweet by an alleged white supremacist group that was broadcast during the Republican National Convention. On Tuesday, an anti-immigrant hate group, Virginia Dare, was highlighted on the convention’s screens.

During his run for president, Trump has repeatedly been accused of encouraging racism. Although the photo is now deleted, Trump retweeted a photo last November that suggested African-Americans were responsible for killing 81 percent of white homicide victims. And last February, he declined to distance himself from the endorsement of David Duke, the former grand wizard of the Ku Klux Klan.