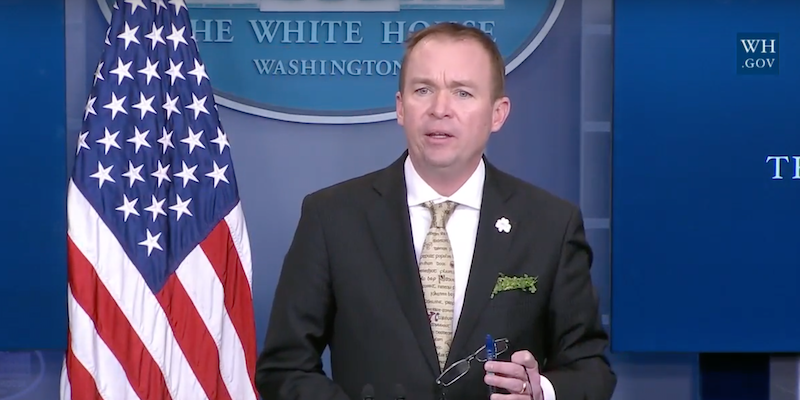 The Meals on Wheels program serves more than 200 million meals to elderly Americans each year.

Fielding a question during the White House press briefing regarding the program Meals on Wheels, which is funded by states in part through a portion of the Department of Housing and Urban Development’s $3 billion Community Development Block Grant program, Mulvaney said it would be “compassionate” to taxpayers to not spend federal funds on initiatives “just because they sound good.”

“You’re only focusing on half of the equation, right? You’re focusing on recipients of the money. We’re trying to focus on both the recipients of the money and the folks who give us the money in the first place,” Mulvaney said. “And I think it’s fairly compassionate to go to them and say, ‘look, we’re not going to ask you for your hard-earned money anymore … unless we can guarantee to you that that money is actually going to be used in a proper function. And I think that is about as compassionate as you can get.”

Mulvaney answers question about Meals on Wheels: "We can't spend money on programs just because they sound good" https://t.co/TLO65zRwIr

The Community Development Block Grant would be entirely eliminated under the Trump administration’s budget blueprint, which increases military spending by $52 billion while cutting funding for the arts, sciences, and an array of programs that help poor and elderly Americans.

Approximately 3 percent of the national Meals on Wheels budget comes from the federal government, according to an organization spokeswoman. The bulk of its national budget, 84 percent, comes from individual and corporate donations. However, around 5,000 local groups also rely on state and federal funds that could disappear if Congress includes this proposal in the actual government budget.

According to Meals on Wheels, approximately 1 in 6 elderly Americans struggle to have enough food to not be hungry. The organization also estimates that, because it delivers 63 percent of its meals to seniors in their homes and thus reduces the number of falls they suffer while traveling, they save the U.S. some $31 billion annual due to a reduction in healthcare costs covered by Medicaid and Medicare.