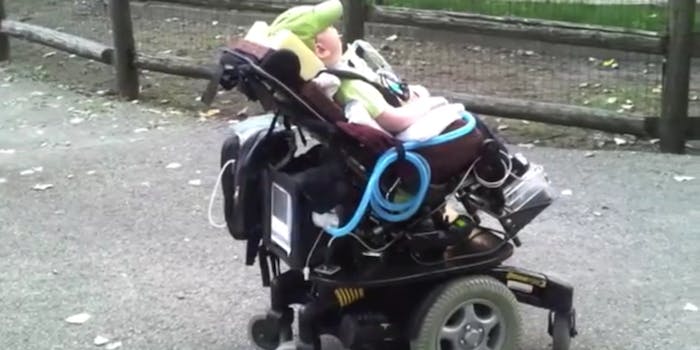 This father's wheelchair for his son was truly a labor of love.

Over the summer, a Chicago engineer named Shea Ako created a lifehack in the truest sense.

Ako’s 2-year-old son, Alejandro, is afflicted with spinal muscular atrophy, a neuromuscular disorder that’s left him nearly immobile. He needed a new power wheelchair, but on the Hacking SMA blog, Ako detailed their struggles with health insurance: His family couldn’t afford a new wheelchair out of pocket, and Blue Cross Blue Shield of Illinois “wouldn’t pay for one because they already paid for a medical stroller when Alejandro was 9 months old. We were told that we needed to wait 5 years. This was much too long to wait, especially during these early years which are so important developmentally.”

So Ako, who has some background in studio engineering, decided to literally take matters into his own hands. He browsed eBay for motorized wheelchairs, found an appropriate one, as well as a wheelchair programmer, and created an interface for controlling the chair. He added that at the time, Alejandro was “able to move his left index finger, his right thumb and some toes on both feet, all with very little force,” so he figured that into the design, building two sensor pedals out of a broken digital kitchen scale. Here’s video of Alejandro testing it out:

“So far the system has been working great and Alejandro has quickly been learning to drive his power wheelchair,” Ako wrote. “His right foot is somewhat stronger than his left and at first he had a tendency to drive in circles, continually turning right. I was tempted to increase the sensitivity of the left pedal to compensate, but under advice from his physical therapist I resisted this temptation and eventually he has learned to compensate on his own and apply less pressure with his right foot in order to go straight.”

As Alejandro continues to explore the world from a new perspective, Ako hopes he can continue to help not just his son, but possibly other children with similar disabilities.