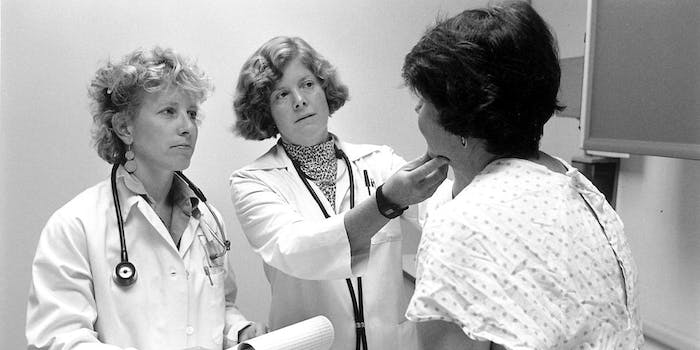 WhatsAppitis is now a medical condition

WhatsAppitis may not be the app-based medical condition we asked for, but it’s definitely the one we deserve.

There’s a reason why Facebook shelled out $19 billion for WhatsApp. People use it. Maybe a little too much.

A woman has been officially diagnosed with WhatsAppitis. By a medical doctor. As a real disorder—not one of those informally-nicknamed maladies like Tinder Thumb (which is what people have been calling it when your thumb gets sore from swiping left and right on Tinder).

No, this is a straight-up sanctioned diagnosis. Esteemed medical journal The Lancet first documented a doctor’s decision to invent a name for the disorder while treating a woman who spent more than six hours responding to WhatsApp messages.

“The diagnosis for the bilateral wrist pain was WhatsAppitis,” the article states. The Lancet pointed out that WhatsAppitis isn’t the first disorder named after people using a faddish gadget too frequently; it references the creation of Nintendinitis in 1990 after people played Nintendo too frequently, and urged doctors to keep abreast of these new disorders.

Although WhatsAppitis is named after the private messaging app, the condition it describes can arise when people use all sorts of smartphone software too frequently, including Messenger or Twitter. The doctor’s decision to dub the disorder ‘WhatsAppitis’ implies a confidence in the messaging app’s widespread appeal and longevity that I’m sure Facebook would find reassuring.

It’s hard to believe WhatsAppitis is a real thing, but it is, so I humbly suggest the following app-based ailments for consideration into the pantheon of novelty medical disorders:

– Acute Favertigo: When one becomes woozy after receiving an unexpected Twitter fav.

– Premature Instagramulation: When one clicks post before applying the proper filter.

– #Nomakeupseasonalaffectivedisorder: Where one take selfies without makeup because the lack of natural sunlight made them too bummed out to put some on