The 3 apps you need to track Hurricane Joaquin

Don't get caught off guard. Keep an eye on the storm.

Want to know Hurricane Joaquin’s status? It’s complicated. As of Thursday morning, it is still uncertain whether Hurricane Joaquin will hit the East Coast or avoid landfall completely. The Category 3 storm was about ten miles north of Samana Clays, Bahamas, according to the National Hurricane Center’s update at 8am ET. As of 11am ET, it had picked up speed and was moving at 6 miles per hour with winds of 125 miles per hour. Hurricane Joaquin is projected to make landfall along the North Carolina coast on Monday at 8am ET, but that is still widely uncertain and changing by the hour. Some models, such as the European Centre for Medium-Range Weather Forecasts, has Hurricane Joaquin staying out at sea and missing the coast altogether.

Forecasters are urging East Coast residents to pay attention to the forecast for Hurricane Joaquin over the next few days, as the storm’s exact path is yet unknown. Again, it is possible this storm could miss hitting land entirely.

Since Hurricane Joaquin will be such a tricky storm to forecast, it’s important to pay attention to weather alerts and advisories over the weekend and up to Tuesday night. If Joaquin hits landmass in North Carolina, significant rain and flooding could hit Washington, D.C., Baltimore, and as far west as the Chesapeake Bay, according to AccuWeather. If it stays a hurricane, forecasters are saying it could reach as far north as New York City and the Long Island Sound.

Even if Joaquin doesn’t hit landmass, The Weather Channel is saying it expects significant flooding for areas of the East Coast.

In short, once we know for sure what option Hurricane Joaquin will take, we’ll have a better idea of how, when and where it will impact people, which is why it is important to track the storm’s course. Here are the essential sites and apps you will need to track Hurricane Joaquin’s path this weekend.

The Weather Channel’s Hurricane Tracker will show you Hurricane Joaquin’s exact location, strength, windspeed, pressure, and how many miles the storm is moving per hour. 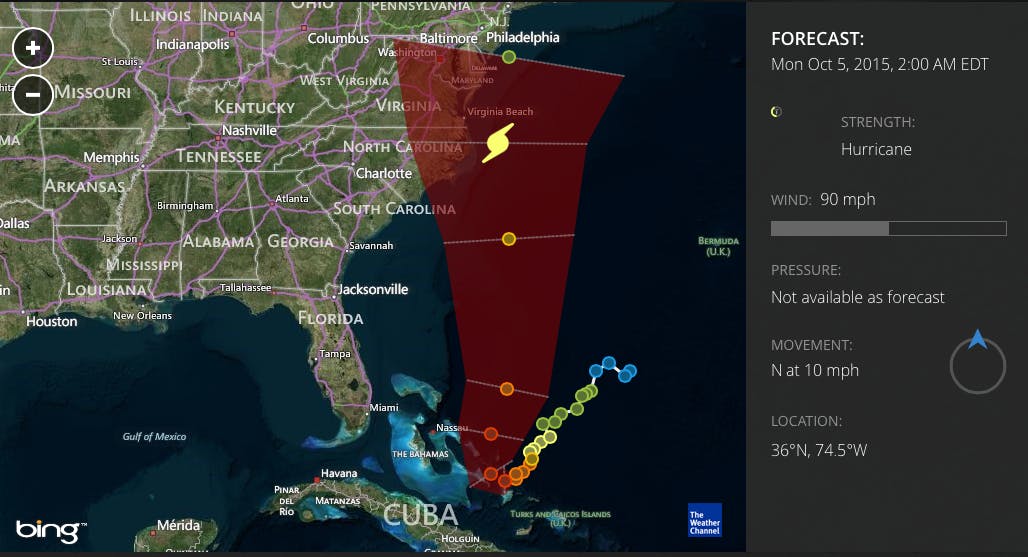 The Hurricane Tracker’s map includes these estimates for the storm’s projected path. Clicking on the dot next to North Carolina, for example, shows that Hurricane Joaquin is projected by NOAA to hit North Carolina on Monday at 2am ET, at a windspeed of 90 mph, which makes it on the high end of a Category 1 hurricane. You can also download The Weather Channel app for iOS and Google Play. 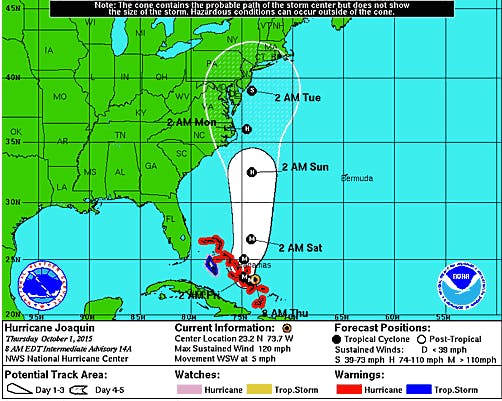 As NHC notes, forecasts can be made in error. This, in fact, is made clear by  the fact that NHC refers to the solid white and white outlined areas as the “cone” of “forecast uncertainty”.

“Historical data indicate that the entire 5-day path of the center of the tropical cyclone will remain within the cone about 60-70% of the time,” writes NHC.

Still, it’s important to note that data from NHC’s zone of uncertainty is what goes into The Weather’s Channel’s storm tracker. NHC is also the best source for the most recent, regular updates on the storm’s trajectory. 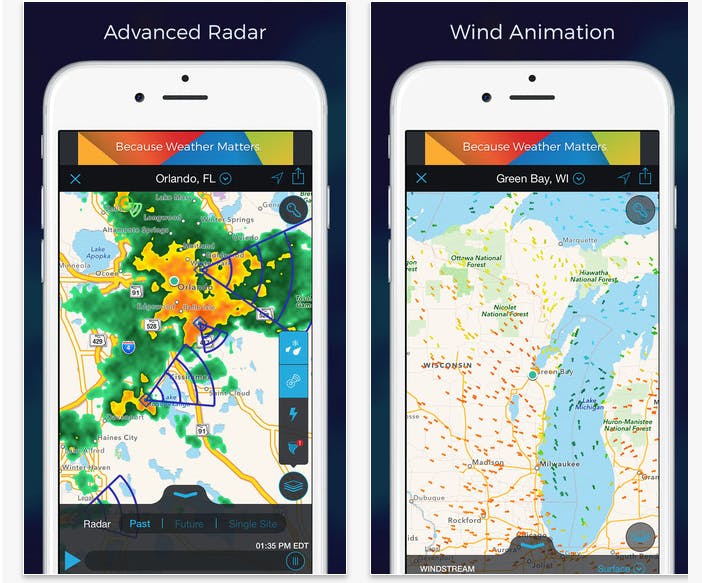 If you download just one app to keep you prepared during severe weather, download Storm. The app allows you to look at hyper-local weather data, which will be useful in the next couple of days as conditions vary along the East Coast. Storm also uses radar data to track the storm in real-time, so you can see the storm’s strength rating, speed, direction, and populated cities in its path. The app also contains customizable push notifications, along with with severe weather alerts and advisories for flooding and severe thunderstorms, likely to come in handy even if Hurricane Joaquin doesn’t hit landmass.

Storm also allows you to share storm tracking and radar data with your family and friends on Twitter.

You can download Storm on iOS. Weather Underground’s original app, which doesn’t have as many storm-specific content as Storm but also contains hyperlocal updates, is available for Android users on Google Play.