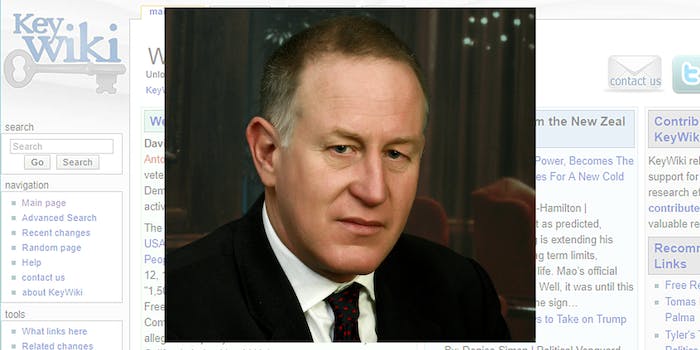 Anyone can make a wiki. There are fan wikis that keep track of TV characters’ backstories, travel wikis that give tourists insider tips, and self-directed learning wikis. Then, there’s KeyWiki: a creepy collection of over 100,000 articles that, according to the site, will “expose the political left in America” by “unlocking the covert side of U.S. and global politics.”

To founder and internet conspiracy theorist, Trevor Loudon, the “left” isn’t just famous activists or outspoken Democrats; it’s anyone whose online presence reflects an anti-Trump attitude. Even if you’ve only joined a Resistance Facebook group or made a protest sign with a turd face shaped like the President, KeyWiki may already have a profile on you.

I became aware of KeyWiki last month, when left-leaning Twitter users began amusedly posting screenshots of KeyWiki profiles created without their permission. Though creeped out, many activists noted that the Wiki had unintentionally created a fantastic social networking tool for radical organizers. Then, I discovered that I had my own KeyWiki profile. After the election, I had joined a Socialist-Feminist Facebook group. I wasn’t active in it, and I deactivated my Facebook last year. But it made me wonder: Who is this red-baiting man obsessed with vaguely active organizers halfway around the globe and, why did he create KeyWiki?

Trevor Loudon is kind of like if Glenn Beck was from New Zealand, and was extremely scared of communism. Loudon spent the late 80s as the face of the Campaign for a Soviet-Free New Zealand, before launching his blog, and some wildest self-published books. One book, Barack Obama and The Enemies Within claims that the 44th President “surrounds himself with Marxists,” in “a coordinated attempt to overthrow capitalism.” One Amazon reviewer lamented that “his ability to see connections and secret plots where none exist make nutjob Glenn Beck look like an amateur.”

Loudon also appears as a speaker at right-wing events. In fact, Loudon appeared on Beck’s show in 2011 to talk about an issue close to his heart, something he dubs ‘Obamunism.’ Yes, instead of being a “birther,” Loudon propagates the idea that Obama, and most centrist Democrats, have a hidden, Commie agenda that they are using to “infiltrate” the mainstream media. Loudon did not answer my request for comment on this article.

According to World View Weekend, Loudon created KeyWiki sometime in 2010 to “profile 35,000 people and U.S. organizations” who are “dragging America down.” Loudon’s website encourages followers to help fill out the wiki’s entries to help spread “free and open sharing of information.”

Though KeyWiki’s own Wiki page claims it “does not support any political party,” the majority of entries are biased in tone and border on doxing. Oddly though, some, like Black Lives Matter organizer Deray McKesson’s profile, include positive accounts of activist behavior. KeyWiki also dredges up the present day locations of elderly people, who once had ties to radical movements in the 60s or participated in Civil Rights demonstrations. If your grandpa or grandma was loosely involved with a protest group sixty years ago, you may find them featured as the “Weekly Featured Profile” on KeyWiki. It’s pretty sickening to think older people who marched for equal rights may face modern stalker behavior from trolls who find them on KeyWiki.

Sofia Sepulveda and I both show up on KeyWiki (right wing watch page). As of this moment, I am finally complete #justice #OurRevolution #blacklivesmatter pic.twitter.com/6FBWCa0Wbt

On KeyWiki, Facebook scrapers or fake accounts are used to collect information on rank-and-file members of political action groups like Black Lives Matter, Our Revolution, Indivisible, and The Democratic Socialists of America.

Often, these so-called “dossiers” have photos, criminal records, location information, and membership in private social media groups. The thing one puts on the internet are always subject to scrutiny if found by coworkers, bosses, and family members. But, scraping membership information from private Facebook groups as evidence that a person is “threatening democracy” is a leap that could be extremely damaging to a reputation. Especially, if it’s wrong.

“My name and a few of my friends are on there with articles about us and we aren’t even members,” one Reddit user wrote on the Chapo Trap House subreddit.

While the site would be a great resource for organizers across the country, the main theme of KeyWiki is misinformation. David Duhalde, a senior electoral manager for Our Revolution, noted that his profile had write-ups of “Facebook invites of events [he’d] never attended.” Another user, active in the anti-Dakota Access Pipeline protests and the Iowa Democratic Socialists, pointed out that his chapter’s DSA page had a section on “Antifa Connections” that included “a picture of Bernie Sanders eating a hot dog.”

To make matters worse, KeyWiki entries often appear at the top of Google searches for less-famous leftists. Duhalde’s KeyWiki entry, for instance, comes up second after his Twitter profile when Google searched.

Unfortunately, even for those empowered by their entries, asking for corrections to KeyWiki is not as easy as editing regular Wikipedia. According to KeyWiki’s “About” page, anyone can make an appeal for a correction on an individual’s “Discussion” page. Then, the members of KeyWiki will take these comments “into consideration.” Shorter entries, like mine, do not possess such a Discussion page. If I wish to suggest edits, I’d  have to apply to be a registered user, “due to concerns about abuse of editing privileges.”

For a person who’s all about individual freedom and protecting American values, Loudon has no qualms about using libel, slander and doxing to threaten people’s individual privacy rights. And, in states like California, where employers are not prohibited to ask job applicants about criminal arrest records, making information, or misinformation like this publicly available could ruin a candidate’s chances.

KeyWiki isn’t the first time the internet has been used to document protesters and activists outspoken against Donald Trump. Last September, BuzzFeed reported that users on 4Chan had created a “watchlist” to specifically dox at least 3,000 people suspected to be Antifa or anti-Trump. Personal addresses, phone numbers, and other identifying information had been attached to Facebook and Twitter users who had signed anti-Trump petitions, subscribed to Democratic site ShareBlue, or responded to organizing event invitations.

Perhaps these lists are how the right and far-right respond to our current “clap-back culture.” Everytime someone screenshots Trump tweeting about “Alex Baldwin,” or students confront politicians by quoting their own promises back to them, someone gets added to a watchlist.

Instead of “dunking on” the left on Twitter, the right goes home and makes a digital “Burn Book.” For Loudon, it’s to invoke fear into others by convincing them that most anti-Trump activists are ISIS-Commie-anarchists ready to brainwash children and bomb government buildings.

Part of democracy is being able to disagree with each other. But Loudon can’t accept that. He can’t accept that perhaps after Trump got elected people were angry, saddened, and confused, so they joined activist groups. To Loudon, that is tantamount to “infiltrating as political operatives.”

So, if you’ve appeared in a Pussy Hat or marched in a NODAPL demonstration, Loudon and his team of two employees may be coming for you. Because, apparently, activism in the age of the internet means that a senior citizen from New Zealand living in a Red Scare cosplay fantasy world will out you on social media.