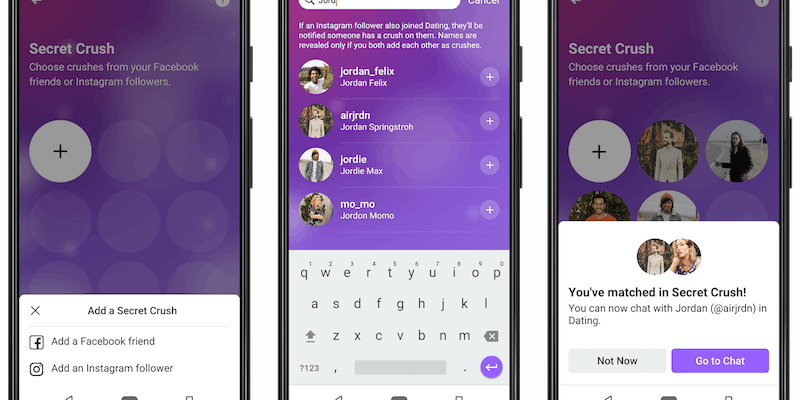 Facebook Dating launched in the U.S. last week with little fanfare. The latest dating app—which is a part of Facebook’s existing app—received a lot of press, but it was unclear if users would respond favorably to a dating app from a social network that many have fled. Of course, many of these users are still on Instagram, which Facebook owns, but the social network itself is increasingly seen as tragically uncool and mostly populated by Boomers. Following the Cambridge Analytica scandal, Facebook also developed the reputation of a company not to be trusted with your personal data. In other words, the brand is not strong.

As a single person who has used dating apps like Hinge and Bumble, I was curious about Facebook Dating—admittedly, because I figured it would have a short shelf life. I opted-in to Dating (which required me to re-download the Facebook app; I’d deleted it long ago because it depleted my phone battery) and then I looked around the app. It was a ghost town. There is a “Secret Crush” section where you can add someone as a crush and you match with them if they also list you as a crush. But the bigger problem is that I don’t want to date anyone who is already one of my Facebook friends. Facebook Dating also suggests people you don’t know for you—but that feature is not available yet for me in New York City.

Right now, Facebook Dating is a static app without a lot to do. In the future, Dating is supposed to match you with others outside your friend group based on mutual interests and even information like what events you’re going to. Again, though, the company will need to convince people to trust its app and opt-in. Will Facebook Dating exist in a year—or even in six months? That’s yet to be determined, but if you are also curious about Facebook’s foray into the world of online dating, here’s everything you need to know.

As I mentioned earlier, Facebook Dating is not a separate app but built into the main Facebook app. To access it, you need to download the latest version of the Facebook app. It’s accessible from the hamburger menu icon in the lower right-hand corner; click that, then scroll down. You’ll see “Dating” with a heart logo right below Events. Once you opt-in, Facebook asks you to fill out a profile, similar to the profiles on Tinder, Hinge, and Bumble. This profile is separate from your regular Facebook profile. You can select who you want to date (women, trans women, men, trans men, and non-binary people are all options), an age range, preferred height, religious views, and if you have/want children. These options are all pretty standard across most dating apps.

You can add photos from your existing Facebook profile to your Dating profile. Facebook also suggests you “describe yourself in three sentences, three words, or three emojis.”

Facebook Dating us currently available in the U.S. and 19 other countries, including Mexico, Brazil, Canada, and the Philippines. It will launch in Europe next year. To use Facebook Dating, you must be at least 18 years old.

On Facebook Dating, there are “liked you” and “conversations” tabs at the top of the home screen. Here, you’ll be able to see the people who liked you, and your conversations with your matches.

The conversations you have on Facebook Dating are separate from Facebook Messenger. You can also only match with your existing Facebook friends through the Secret Crush feature, which is kind of a relief.

Secret Crush sounds like a feature from 2004 (remember Pokes?), but Facebook clearly hopes that it will attract users. To use, you select Secret Crush on the Dating home screen, then add existing Facebook friends to your crush list. If they also select you as a crush, the app with notify both parties of a match. Once you select someone as a crush, they receive a notification that someone has a crush on them—that is if they also opted into Dating. You can add up to nine crushes at a time and remove people as you wish. A feature like Secret Crush is definitely not new to the world of online dating. Apps like Bumble inform you when people like you, and show blurred-out avatars to try and entice you to find out who’s behind the blurs.

For good reason, people may be hesitant to give more data to Facebook. As the Electronic Frontier Foundation (EFF) points out, Facebook is not currently profiting off its dating service, but that may change in the future. “Facebook could combine your dating profile information with the rest of your account data—it’s hard to imagine the company giving up the ability to add its years of data on users with the new data it collects about their dating,” the organization says.

So although Facebook is not selling your dating data to third-party companies as of today, the possibility of that changing is something you should be aware of.

The app makes you agree to its terms of service while creating a profile on Facebook Dating. “Your Dating profile is visible to anyone in Dating,” the app states. “Your first name, age, and photos are always available on your Dating profile.”

Your Facebook Dating profile is separate from your regular Facebook profile, so if you make changes to one, it won’t affect the other. The app also states that “your Dating profile can be seen by anyone who joins Dating, except your current Facebook friends and anyone you’ve blocked.”

Since Facebook just rolled out Dating to the U.S., it’s hard to say if it’s worth downloading Facebook just to create a dating profile. Tinder launched in 2012, and several apps followed in recent years that mimic its user experience and profile. Facebook is very late to the party. It also feels like a desperate attempt by Facebook to lure younger users back to its app. At this point, single people know which apps they like and how to use them. It’s unlikely that everyone will migrate to Facebook Dating in 2019, but we’ll have to wait and see. First, people need to actually join.