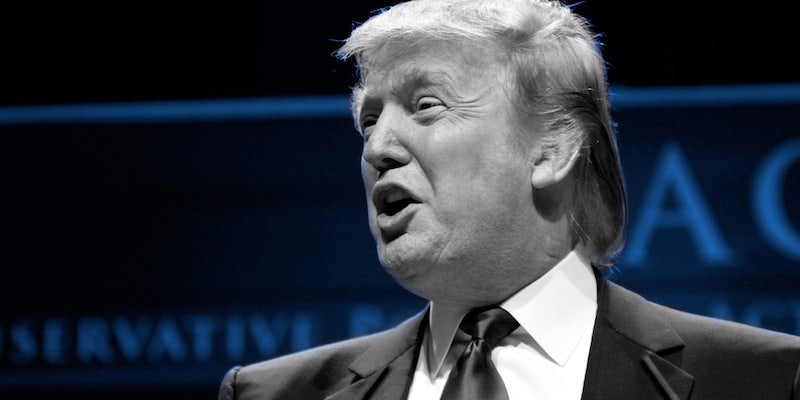 'I'll tell you what, if Iran was a stock, you folks should go out and buy it right now.'

Let’s be honest. When the world tuned into the Republican presidential debates on Thursday, there was one thing on the forefront of their minds: What is Donald Trump going to say?

The Donald, equally famous for his ridiculous hair, reality TV stardom, billionaire status, and statements that absolutely no one else with serious presidential aspirations would say, delivered. The guy who in recent weeks has both called Mexicans immigrants to the U.S. “rapists” and insulted Sen. John McCain (R-Ariz.) for being a prisoner of war in Vietnam came through.

Whether he beat candidates like Jeb Bush or Rand Paul is debatable, but whether he maintained that streak? You bet your garish New York City residential tower he did. Below is everything Trump said Thursday night, with thanks to the Washington Post’s live transcription service.

[In response to the question “Is there anyone on stage, and can I see hands, who is unwilling tonight to pledge your support to the eventual nominee of the Republican party and pledge to not run an independent campaign against that person?”]

[In response to moderator Bret Baier’s response “Mr. Trump to be clear, you’re standing on a Republican primary debate stage.”]

[Baier: The place where the RNC will give the nominee the nod.]

[In response to Baier saying “And that experts say an independent run would almost certainly hand the race over to Democrats and likely another Clinton. You can’t say tonight that you can make that pledge?”]

I cannot say I have to respect the person that, if it’s not me, the person that wins, if I do win, and I’m leading by quite a bit, that’s what I want to do. I can totally make that pledge. If I’m the nominee, I will pledge I will not run as an independent. But—and I am discussing it with everybody, but I’m, you know, talking about a lot of leverage. We want to win, and we will win. But I want to win as the Republican. I want to run as the Republican nominee.

[In response to Paul saying “I’d say that [Trump’s] already hedging his bets because he’s used to buying politicians.”]

Well, I’ve given him plenty of money.

[In response to Baier clarifying: You’re not gonna make the pledge tonight?]

I will not make the pledge at this time.

[Kelly: “For the record, it was well beyond Rosie O’Donnell.”]

[Kelly: “You once told a contestant on Celebrity Apprentice it would be a pretty picture to see her on her knees. Does that sound to you like the temperament of a man we should elect as president[?]”]

I think the big problem this country has is being politically correct. I’ve been challenged by so many people, and I don’t frankly have time for total political correctness. And to be honest with you, this country doesn’t have time either. This country is in big trouble. We don’t win anymore. We lose to China. We lose to Mexico both in trade and at the border. We lose to everybody.

And frankly, what I say, and oftentimes it’s fun, it’s kidding. We have a good time. What I say is what I say. And honestly Megyn, if you don’t like it, I’m sorry. I’ve been very nice to you, although I could probably maybe not be, based on the way you have treated me. But I wouldn’t do that.

But you know what, we need strength, we need energy, we need quickness and we need brain in this country to turn it around. That, I can tell you right now.

[In response to moderator Chris Wallace’s question that “you say that the Mexican government is sending criminals … across the border […] Why not use this first Republican presidential debate to share your proof with the American people?”]

This was not a subject that was on anybody’s mind until I brought it up at my announcement. And I said, Mexico is sending. Except the reporters, because they’re a very dishonest lot, generally speaking, in the world of politics, they didn’t cover my statement the way I said it. The fact is, since then, many killings, murders, crime, drugs pouring across the border, are money going out and the drugs coming in. And I said we need to build a wall, and it has to be built quickly.

And I don’t mind having a big beautiful door in that wall so that people can come into this country legally. But we need, Jeb, to build a wall, we need to keep illegals out.

[Wallace: I’ll give you 30 seconds to answer my question.]

I was at the border last week. Border Patrol, people that I deal with, that I talk to, they say this is what’s happening. Because our leaders are stupid. Our politicians are stupid. And the Mexican government is much smarter, much sharper, much more cunning. And they send the bad ones over because they don’t want to pay for them. They don’t want to take care of them.

Why should they when the stupid leaders of the United States will do it for them? And that’s what is happening whether you like it or not.

[Baier: Mr. Trump, Obamacare is one of the things you call a disaster.]

[Baier: Saying it needs to be repealed and replaced.]

[Baier: 15 years ago … You were for a single-payer system … Why were you for that then and why aren’t you for it now?]

First of all, I’d like to just go back to one. In July of 2004, I came out strongly against the war with Iraq, because it was going to destabilize the Middle East. And I’m the only one on this stage that knew that and had the vision to say it. And that’s exactly what happened.

[Baier: But on Obamacare…]

And the Middle East became totally destabilized. So I just want to say: As far as single payer, it works in Canada. It works incredibly well in Scotland. It could have worked in a different age, which is the age you’re talking about here. What I’d like to see is a private system without the artificial lines around every state. I have a big company with thousands and thousands of employees. And if I’m negotiating in New York or in New Jersey or in California, I have like one bidder. Nobody can bid.

But they have total control of the politicians. They’re making a fortune. Get rid of the artificial lines and you will have yourself great plans. And then we have to take care of the people that can’t take care of themselves. And I will do that through a different system.

[Paul: … I think you’re on the wrong side of this if you’re still arguing for a single-payer system.]

I don’t think you heard me. You’re having a hard time tonight.

[Baier: And you said recently, quote, “When you give, they do whatever the hell you want them to do.”]

You’d better believe it. If I ask them, if I need them, you know, most of the people on this stage I’ve given to, just so you understand, a lot of money. I will tell you that our system is broken. I gave to many people, before this, before two months ago, I was a businessman. I give to everybody.

When they call, I give. And do you know what? When I need something from them two years later, three years later, I call them, they are there for me. So what did you get? … And that’s a broken system. I’ll tell you what, with Hillary Clinton, I said be at my wedding and she came to my wedding. You know why? She didn’t have a choice because I gave. I gave to a foundation that, frankly, that foundation is supposed to do good. I didn’t know her money would be used on private jets going all over the world.

[Jeb Bush denies that he called Trump a “clown, a buffoon.”]

First of all, Jeb, I am very happy that you denied that, and I appreciate that very much. He is a true gentleman. He really is.

One thing he did say, and I mean that. The one thing he did say about me, however, was my tone. And I also understand that. But when you have people that are cutting Christians’ heads off, when you have a world that the border and at so many places, that it is medieval times, we’ve never—it almost has to be as bad as it ever was in terms of the violence and the horror, we don’t have time for tone. We have to go out and get the job done.

[Baier:  a top Iranian general [is] traveling to Moscow to meet with Russian President Vladimir Putin … if you were president, how would you respond to this?]

I would be so different from what you have right now. Like, the polar opposite. We have a president who doesn’t have a clue. I would say he’s incompetent, but I don’t want to do that because that’s not nice.

But if you look at the deals we make, whether it’s the nuclear deal with 24-hour periods—and by the way, before you get to the 24 hours, you have to go through a system. You look at Sgt. Bergdahl, we get Bergdahl, a traitor, and they get five of the big, great killers leaders that they want. We have people in Washington that don’t know what they’re doing.

Now—[applause] I agree—Now, with Iran, we’re making a deal, you would say, we want him. We want out our prisoners. We want all these things, and we don’t get anything. We’re giving them $150 billion dollars plus, they are going to be—I’ll tell you what, if Iran was a stock, you folks should go out and buy it right now because you’ll quadruple—this, what’s happening in Iran, is a disgrace, and it’s going to lead to destruction in large portions of the world.

Our country is in serious trouble. We don’t win anymore.

We can’t do anything right. Our military has to be strengthened. Our vets have to be taken care of. We have to end Obamacare, and we have to make our country great again, and I will do that.

And if you just want to watch The Donald in action, here’s the full video of the first 2016 GOP debate: