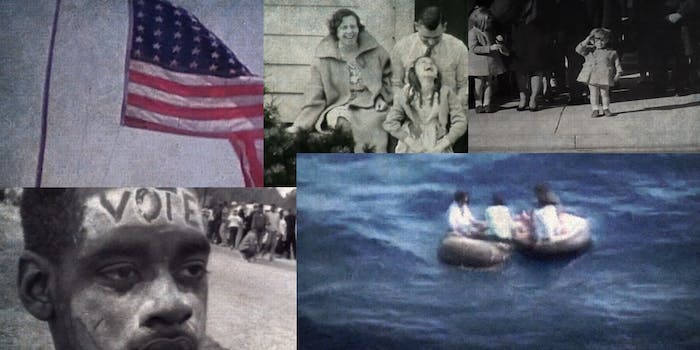 That 1952 baseball game is an incredible find.

It’s been interpreted as an ode to Eric Garner, the black man in Staten Island choked to death by a police officer in 2014. The officer, Daniel Panteleo, wasn’t charged in Garner’s death, despite it being caught on video.

But it’s also a remarkably rich trove of historic clips, many—but not all—related to protests and the American civil rights movement. The following list is our admittedly incomplete list of footage we could clearly identify.

:01 Rihanna starts in front of Pasadena City Hall. You may recognize this facade—it’s used in Parks and Recreation—that was the visual joke, that Pawnee would have such an ornate City Hall, though the rest of the video doesn’t indicate Rihanna was going for a joke here. Pasadena told the Daily Dot that Rihanna filmed there Dec. 13, 2014.

3:02 Game seven of the 1952 World Series. New York Yankee Mickey Mantle hits a home run off of Brooklyn Dodgers pitcher Joe Black, who earned Rookie of the Year that year. Buoyed by Mantle, the Yankees go on to win. Of note is the fact that Black’s teammate, Jackie Robinson, who had broken the sport’s color barrier five years earlier, had called out the Yankees for not having any black players earlier in 1952

3:29 “We are together once and for all” was a common slogan in African-American labor movements in the late 1960s

3:48 African-American protesters from the March on Washington in 1963, followed by protests over Eric Garner, the Staten Island, N.Y. man choked to death by a police officer in 2014

3:58 Dr. Martin Luther King, Jr. giving his iconic “I Have a Dream” speech, part of the March on Washington protests

3:59 Robert F. Kennedy gives his own iconic speech, informing a crowd that King has been assassinated

4:07 The Lorraine Motel, where King died, now the site of the National Civil Rights Museum

4:14 University of California-Davis police officer John Pike pepper-sprays seated Occupy protesters on Nov. 18, 2011. The students and Pike later sued the school; Pike settled for $38,000, and the students he sprayed $30,000 each. This is followed by police spraying civil-rights protesters with firehoses, a common tactic in the Birmingham Campaign.