How Cronomio turned Facebook events into a marketing scheme.

By now, you’ve probably spotted or maybe even joined one of the summer-long “FREE EVENTS” groups that have been popping up on Facebook over the past 48 hours. The public events, created for 25 cities in the United States and 36 major international cities, have amassed thousands of participants and are now nearly unavoidable in your News Feed.

So where did the come from and how did they get so big? 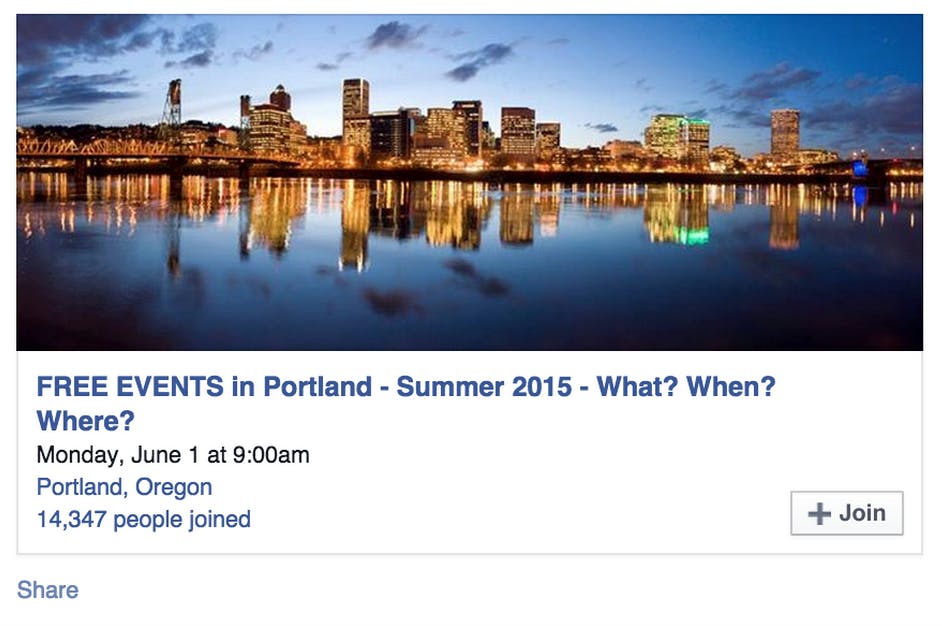 The company behind the wave of events is Cronomio, a French startup started by students from Paris Institute of Political Studies (called Sciences Po). The team has an app set to release in the near future—it’s currently available as a beta only in France—which is described as “a social platform for events integrated with your calendar.”

“We started by creating an event in Paris, invited our friends and then it went viral naturally after a day or so,” Cronomio COO Artur Reszka explained to the Daily Dot. The Paris event now sits at over 100,000 attendees.

Encouraged by the success and comments generated by the first event, Cronomio began building more of the events in major metropolitan areas. The events have next to no information on them outside of the event name, which asks “What? Where? and When?” The event dates are set from June 1 through August 31, encompassing the summer months, and the page description share free events in the given city while linking to the other locations that have Cronomio hosted events.

“The Facebook events empower communities in number of cities to share information about free events. As organisers of this platform of information exchange we will moderate the pages a little bit to ensure that all spam and irrelevant posts do not cause chaos and that relevant information can be found,” Reszka explained.

For whatever reason, the events seem to have caught on. Nearly 120,000 joined the Chicago event. 110,000 are attending in New York City. 360,000 in London. Reszka says the growth has been entirely natural. “We did not spend a penny on ads of any kind,” he said. 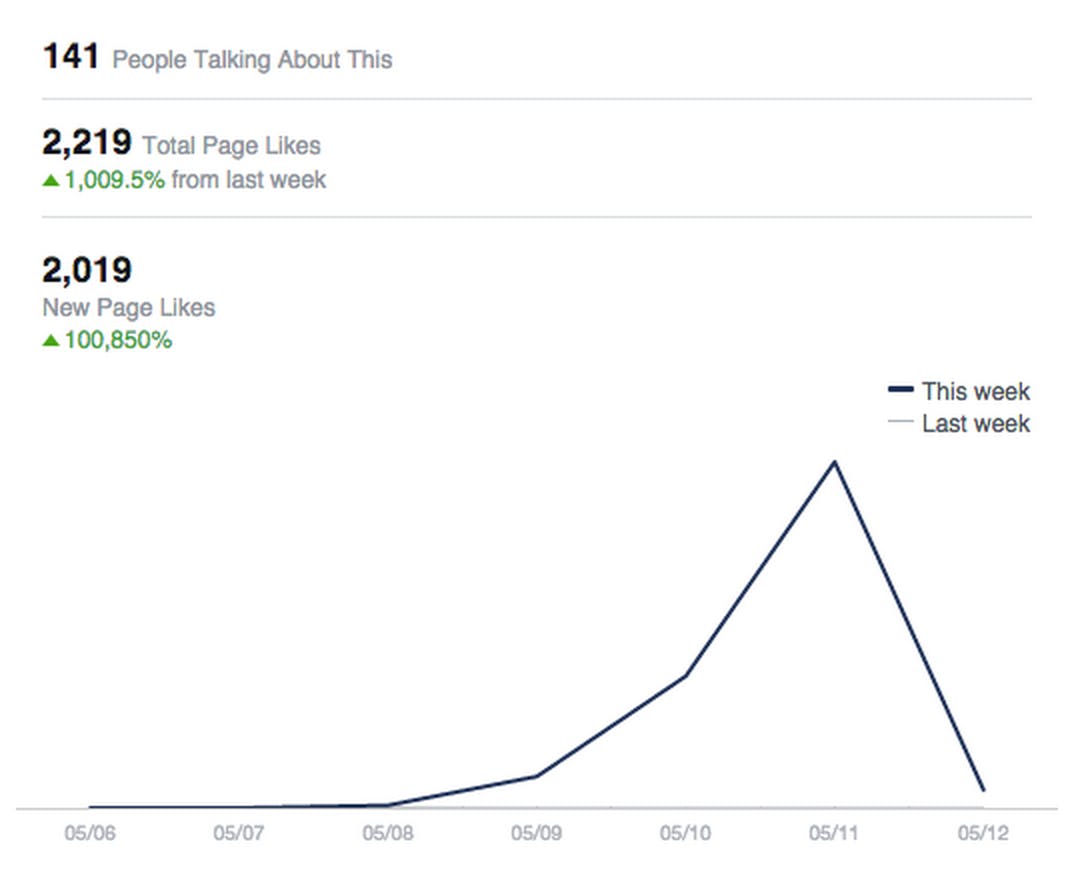 Interest in Cronomio’s own page has skyrocketed as well. The app’s page on Facebook now has over 2,000 likes, which Facebook lists as a 100,850 percent increase in the past week. There are even requests up and down the wall on Cronomio’s own Facebook page from people asking the company to make pages for other communities. 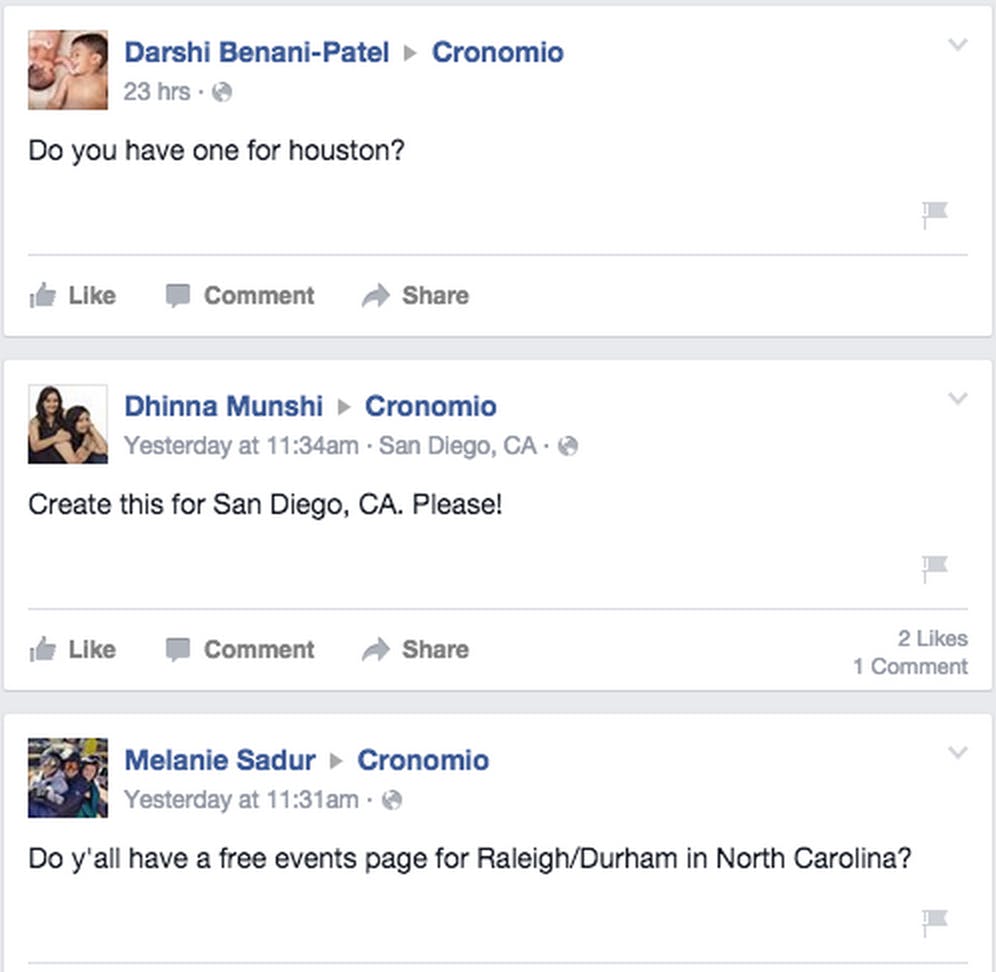 The people asking for Cronomio to make an event for their city could do so themselves if they wanted. It’s not immediately clear what these Facebook users are asking of Cronomio, or what exactly it is that they expect.

The likes and comments on the app’s own page pale in comparison to the network the company has built through its Facebook events: In total, Cronomio has amassed nearly two million followers.

The Facebook events are getting tons of use already, the walls of each filling up with posts of yoga in the park and basement concerts from people sharing free happenings around their cities. Ironically, Cronomio’s viral Facebook listings are also doing Cronomio a big favor: they’re proving Facebook’s own way of handling events to be inadequate.

“Facebook events—although great—suffer from a couple of problems that [Cronomio] will solve,” Reszka said. “Namely at the moment it is quite difficult to find a particular event on a particular day. Our app will not only enable users to do that but actually goes much further and offers full personalisation of events to interests of each user.”

Reszka says there is already plenty of people asking for more information about Cronomio since the events went live. “The interest in the app has been huge! We have receive hundreds of [Facebook] messages, tweets, emails, and even phone calls asking when will the app be released.”

Though the startup doesn’t have an official release date set, Reszka said he and his team are “very excited about the entire situation and work incredibly hard to speed up a release as much as possible.”

What might be more interesting than the actual app, though, is how Cronomio is marketing itself.  By creating the Facebook events, the company is curating a list of potential future users. While the app is available only in a limited beta, the company now can see potential interest in major markets around the world so it knows where it might succeed upon launch.

Even better for Reszka and his team, they have a direct line to those users once the app does launch. Those two million people following Cronomio’s events on Facebook? They’ll receive a notification when Cronomio posts something to the wall of the event, meaning two million users will be alerted when the app launches.

Given the organic demand for more event pages, it doesn’t seem to bother Facebook users that the events pages are basically a promotional tool. As for Facebook as a platform, Cronomio doesn’t appear to be in violation of the company’s terms of service agreement, even as its ad-like listings take the network by storm.