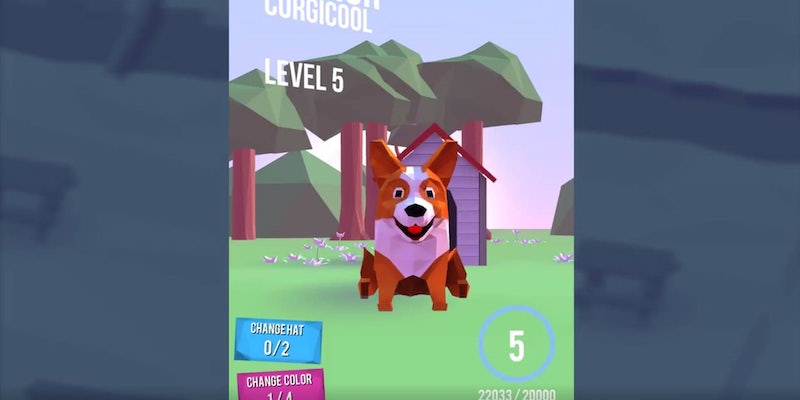 Yes, you get to control the puppers and doggos.

WeRateDogs, one of the internet’s most adorable (and controversial) destinations, released a video game today.

The social media account that rates dogs (or doggos) released a free-to-play, endless-runner game appropriately named Good Dogs! The game is in collaboration with London-based Fourth Wall Games and is now available on iOS and Android.

If you aren’t familiar with the WeRateDogs Twitter account already, be prepared to spend the rest of your day scrolling through it. Founded by college student Matt Nelson, the dog rating account has 1.22 million followers on Twitter, 104,000 on Instagram, and 110,000 likes on Facebook. The ratings system is as fair as any dog scoring could be—no dog ever gets less than a 10 out of 10. But it is the dry, dorky commentary Nelson uses in each post that keeps people coming back.

Nelson announced the release of his mobile app in the only way he could yesterday.

Tomorrow is a big day. I hope you're all pupared

And today he announced the launch, not forgetting to include the ongoing trolling of a man named something like Brent.

OUT NOW ON IOS AND ANDROID
(it's a good game, Brent)

The Good Dogs game is easy to play, but hard to master. First, choose your pupper. When the game starts, your dog will walk its way across Hipster Park, where you will need to slide your finger across your smartphone to control its movements, avoiding obstacles and picking up dog treats. You can unlock new dogs and even collect hats.

We played the game for a while and found it both frustrating and satisfying. It plays somewhere between Flappy Birds and Temple Run, but its mechanics can be tricky.

Still, losing is arguably the best part of the game, as you are greeted with one of Nelson’s zippy one-liners and infamous out-of-ten rating, making the game a joy, regardless of your pedigree.