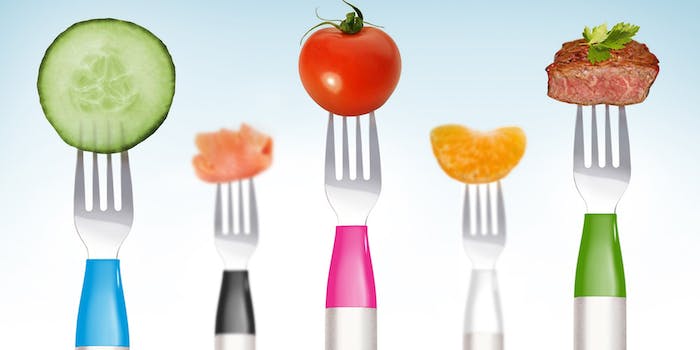 5 gadgets that shame you into losing weight

The vibrating smart fork HAPIfork is just one of a slew of food-shaming gadgets aimed at "helping" (re: bullying) people into losing weight.

Guess what, gentle reader? You are a fat, fat fatty. Your butt is fat. Your arms are fat. Your brain is fat. And why are you such a fat, fat fatty? Because you put too much food in your body, and you’re a gluttonous pig with not even a modicum of human self-control, and your life will probably end with you drowning in a tub of melted Edy’s, and firefighters will have to lift your fat-fat-fatty body out of your apartment with a giant crane.

Fortunately, there’s a new device on the market that can save you from such a tragic fate. The HAPIfork is a smart fork that’s supposed to train you into eating slower (which is positively correlated with losing weight) by zapping you with a vibration if you shovel food into your mouth too quickly.

Dubbed the “food-shaming fork” by writer Jessica Roy, who penned a hilarious account of her week using the device for New York magazine, the device is just one of many available on the market that purport to help you lose weight by using the most effective tool of all: cold, hard, naked shame.

Nevermind the fact that studies have shown that shaming people into losing weight can actually lead to weight gain. From apps that deliver automatic thinspo notifications to wearables that jiggle your love handles to measure your BMI, this new generation of fat-shaming tech is basically the high-tech equivalent to your mom buying you pants a size too small to “inspire” you to lose weight, or your most passive-aggressive friend asking if you’re really going to eat that sixth Oreo.

Here’s a roundup of just a few of these gadgets. And try to read this listicle while you’re taking a few steps on the treadmill or something,fat-fatty. You’re making everyone sick here.

If you’re trying to lose weight and you have something of a masochistic (or maybe just self-loathing) streak, try Carrot Fit, the app that encourages you to exercise with such “inspirational” messages as “Suck it up so you won’t have to suck it in” and “You’re not going to get the butt you want by sitting on it.” The weight loss app, which has been sharply criticized by the National Eating Disorders Association (NEDA), also portrays you as a morbidly obese marshmallow avatar, regardless of how much weight you actually want to lose. So if you didn’t have a bad case of body dysmorphia before downloading Carrot Fit, you will after.

Want a weight loss app that combines Carrot Fit’s unique brand of fat-shaming with a healthy dose of misogyny? Check out Nenshou, a Japanese app in which buxom female trainers encourage men to lose weight. Yet while the trainers in the men’s version of the app help users lose weight by offering compliments and gentle goading, the floppy-haired virtual boyfriends in “Nenshou for Girls” provide no such encouragement, instead berating you with phrases like “Hey, fatty, lose weight!” So to recap: Men trying to lose a few pounds should be gently guided through the weight-loss process, while women trying to do same are too grotesque and repulsive to be treated with anything other than outright contempt.

Like most fitness-tracking wearables, this wristband lets you set a goal for how many steps you’d like to walk that day, also monitoring your activity, heart rate, and calories burned. Unlike other fitness trackers, however, the Garmin Vivofit has one unique feature: The device has an inactivity alert, meaning it flashes a red light if you’ve been inactive for more than 15 minutes. Think you can take a break from your active schedule to have a beer on your couch for a few minutes? Wrong! Sitting is for pansies. Go run five or six miles around your block before you even think about your bubble butt touching upholstery.

Named after the Russian scientist Ivan Pavlov, who used electric shocks to conduct his famous classical conditioning experiment, the Pavlok is a wristband that delivers a small electric shock if you fail to live up to your exercise or nutrition goals for the day. If you succeed in reaching your fitness goals for the day—like, say, if you consume under 2,000 calories—Pavlok will reward you with a small sum of money. It’s an ideal device for those who’d like to lose weight, but would prefer to be treated like a dog being slapped with a newspaper for peeing on the carpet than an actual human being.