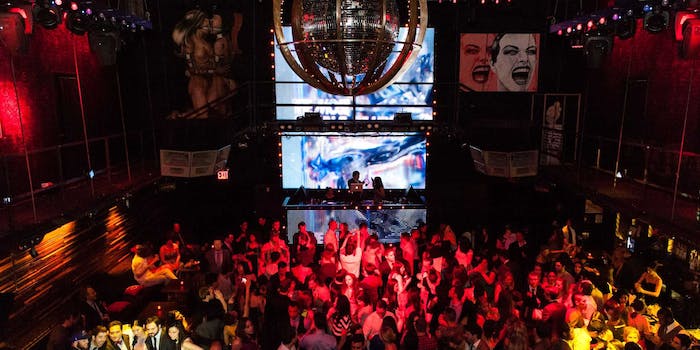 Dispatches from last night’s Webutante Ball, aka prom for nerds

Every year, New York City hosts Internet Week, a week-long series of conferences, panels, and networking opportunities for people in the tech industry. The culmination of Internet Week is the Webutante Ball, a giant soiree in the heart of Chelsea where tech’s biggest names gather to rub elbows (and other assorted body parts). It’s marketed as the “nerd prom” of the New York City startup scene, except instead of corsages attendees wear Google Glass and (shudder) fedoras.

As the Internet’s newspaper of record, the Daily Dot felt it was only appropriate to get in the spirit of Internet Week by asking two of its reporters, EJ Dickson and Greg Seals, to cover Webutante Ball. After promising that a) we wouldn’t have to talk to anybody, and b) there’d be free alcohol and appetizers, we tore ourselves from our laptops, took a few shots of liquid courage, and relived our high school experiences all over again by heading to the Marquee Club, the location of this year’s Nerd Prom.

Here are some dispatches from the field. (Spoiler alert: We got drunk, danced to a lot of Beyoncé, and pissed off pretty much everyone there.)

We arrive at Marquee, where people are lining up on the curb to get in. Attendees pull up in limos and clubwear, fully swagged out in suits and cocktail dresses. My colleague Greg is wearing a button-up and sneakers; I am dressed in clogs and a $20 checkered trapeze dress that makes me look 8 years old. We are by far the most under-dressed people present.

We are greeted with a blast of Arctic air as we enter the club. A pretty, olive-complected 20-something woman wearing a cocktail dress with the Stoli logo emblazoned on it greets us warmly and hands us a watered-down vodka soda. She looks kind of like a more bored and tired version of Sloan from Entourage. 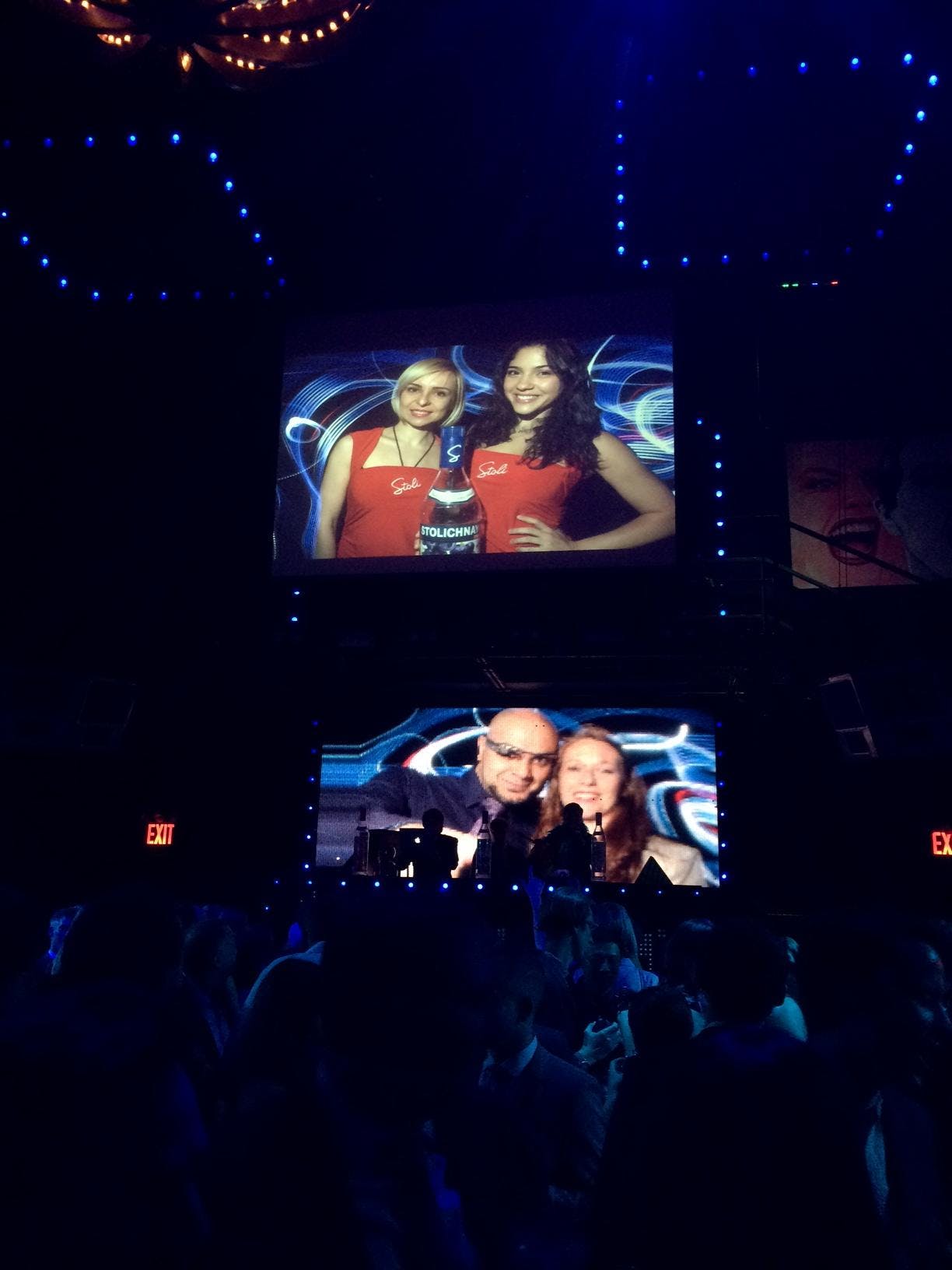 We immediately decide we want to be friends with Sloan and ask her how she got this job. She looks at us blankly. “I interviewed for it,” she says, and turns her attention to someone else at the door. This marks the beginning of the evening’s offending offensive.

We head to the bar, where the drinks are all named for tech (sort of) puns (sort of). We order a Digital Love and a Teal-tini. The Digital Love is fine, if a bit watered-down. The Teal-Tini looks and tastes like aquarium water. I steal a Digital Love from a lady who is wearing the same hat Jamiroquai wore in the “Canned Heat” video.

We head to the “photo booth,” which is sponsored by a startup called Lightbomber and creates swirly light patterns in the background of photos. We don feather boas and a crown as a man with electronic lights on his hands dances wildly behind us. His gestures are frenetic, like that of a raver. Greg becomes concerned he will get hit on the head.

Assuming that electronic light man is a club or PR firm employee of some sort, I sarcastically ask him—his name is Ryan—whether flailing violently behind people as they take photos is his full-time job. Ryan politely says that it is, and in fact he is the owner of the aforementioned startup. Ryan is the second person we have offended.

Greg and I find solace in a group of mutual friends attending the event, with whom we connect on Twitter. We decide that if anyone asks, we are not reporters, but the founders of a dating app for polyamorous couples. We find this backstory very funny for approximately 30 seconds, after which we immediately forget about it.

Greg and I end up talking to a congenial Korean man named Kuan, who says that he is the owner of an app called Poncho. Kuan demonstrates that Poncho is a weather app, much like Weather.com, except it has a cat for a logo. We remark that the cat could be fuzzier, and return to the bar to get another drink.

I spot Sloan by the bar and smile and wave at her, at my new friend Sloan. Sloan sees me, does not wave back.

At this point well into our cups, we find ourselves in conversation with a group of gentlemen ensconced in a booth. I scream at the gentlemen that the glass of pinot grigio I’m nursing “fucking sucks” and tastes like “pee.” Greg takes a sip of the wine and voices his assent, stating that it tastes like “a bottle of grape juice if you left it in a hot subway stop for a month.”

The gentlemen then quietly inform us that they run a startup that delivers different kinds of wine to your doorstep and supplied the wine we were drinking. They then spend a few minutes trying to persuade us that the wine was delicious and that our palates were underdeveloped before we slunk away ignominiously.

We head to the dance floor. Greg dances to Beyoncé with a girl in a flouncy white dress while I start wandering around the room approaching people, screaming “WHAT’S YOUR APP?!?!” to random partygoers. Everyone has either an app or a renewable energy startup.

Webutante Ball organizer Richard Blakeley appears on stage, announcing that it’s time to anoint the King and Queen of Nerd Prom. Greg gets very excited. Blakeley then turns to the couple closest to the stage, hands them a crown and scepter, and pronounces them the winners, based on their proximity to his person. He then proclaims the winner of the night “#selfies.” Greg gets very upset, later complaining that the whole ceremony was “fixed.”

Greg alleviates his feelings of anger and sadness over the Nerd Prom ceremony by reaching over to a man near him on the dance floor and stroking his ascot.

Greg and I try to set one of our friends up with a man sporting a scruffy beard and an ill-fitting suit. These plans are thwarted when the man reveals he has a girlfriend, and then goes onto try to pitch us on his mattress startup. Only at #Webutante do you get pitched by the guy you’re trying to get your friend to have sex with.

We manage to meet the Nerd Prom King and Queen, who turn out to be part of the Yankees social media squad. Greg gets one of their numbers and immediately starts texting him to ask for free tickets. He has yet to receive a response.

The night is winding down. We meet a large bearded man wearing a kilt and holding an umbrella, which upon closer inspection is an Asian parasol with L.E.D. lights wrapped around it. Obviously, we take a few selfies with the man and his parasol as he describes the different circumstances with which he wears underwear with his kilt. It’s by far the most interesting conversation of the night. 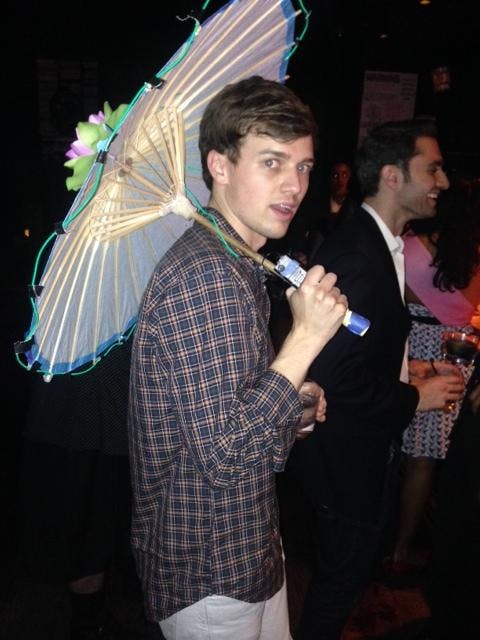 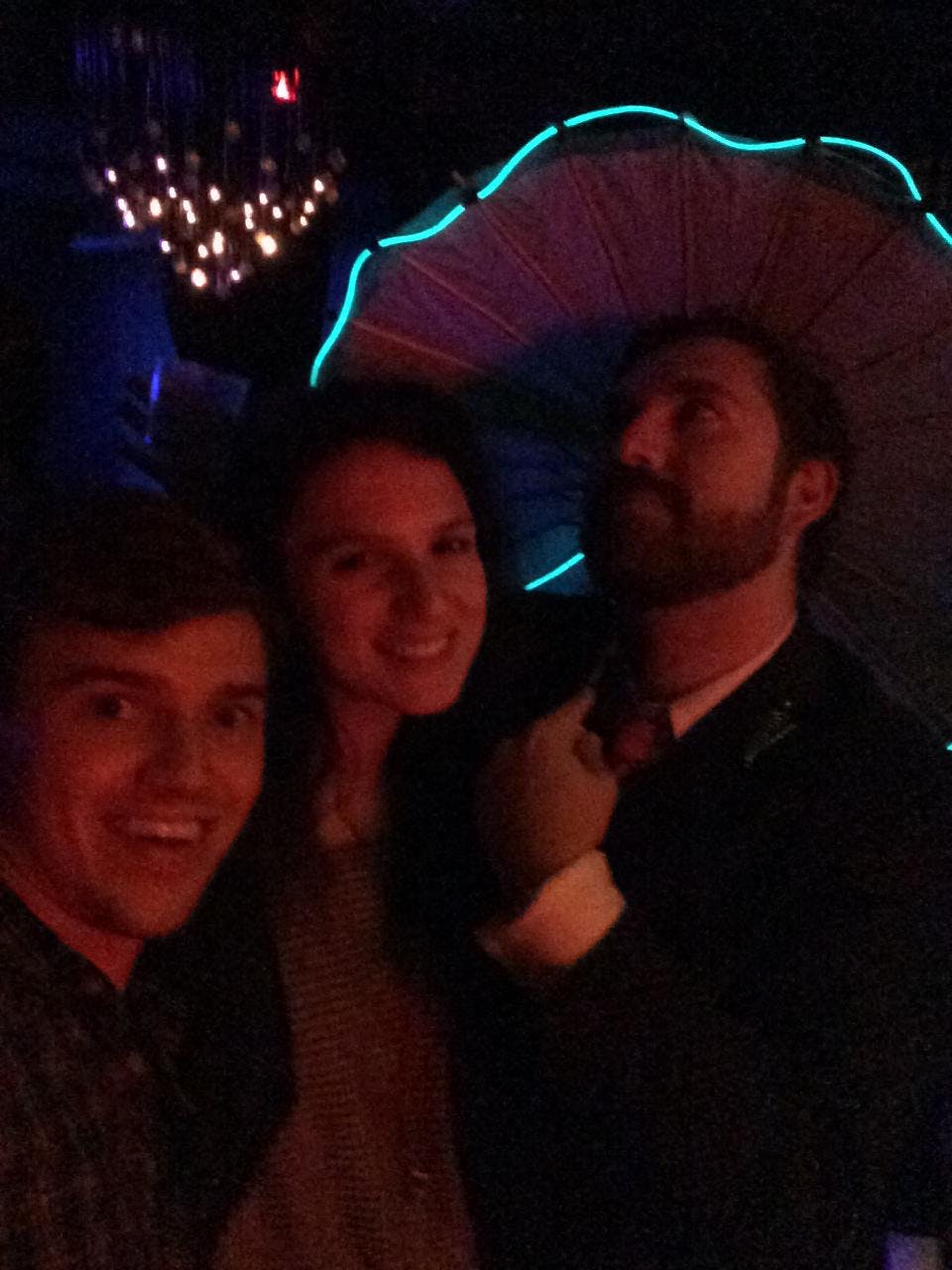 The lights come up abruptly, revealing a club full of intertwined, vodka-soda-filled bodies making out in pleather booths. It feels exactly like being at a bar mitzvah, or a basement at a middle school party when the grown-ups come home.

On the way out, we encounter a tall man in vibrant red pants, neckerchief, and black fingerless leather gloves. I ask him why he is wearing said gloves, and he says it is because he had busted his knuckles. I forcibly remove his gloves to confirm. His knuckles are lily-white and pristine. 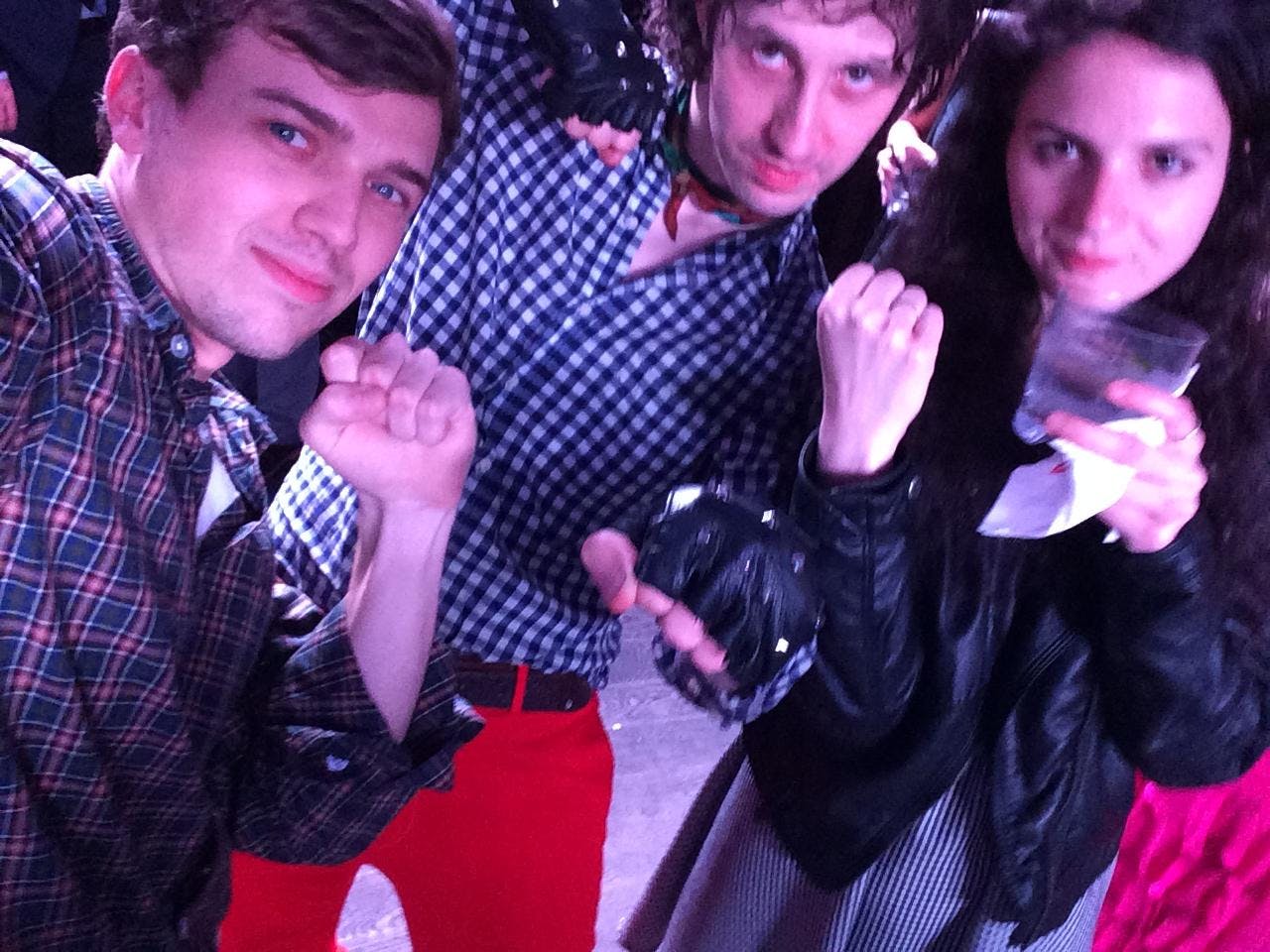 Upon leaving the club, we order a free cab by entering a Webutante promotional code into Gett. A woman behind us gets her stiletto heel stuck in a crack on the sidewalk. “Are you OK?” we yell, followed by, “What’s your app?”

On the way home, we discuss #WebutanteBall, the people we met, and the apps that they all had. All we manage to conclude is that Nerd Prom is way less like a prom than a vaguely tech-themed bar mitzvah.