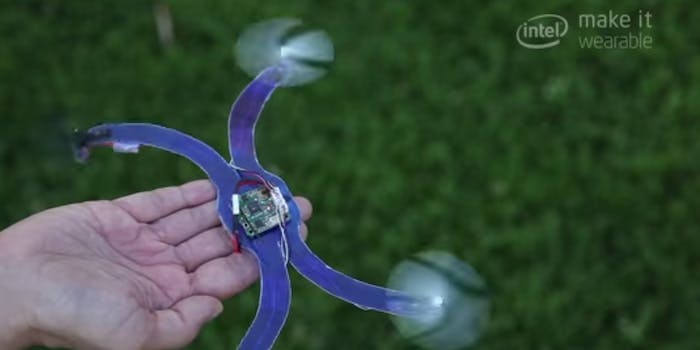 This exciting combination of two of the most interesting developments in personal technology is the brainchild of a team led by Christoph Kohstall. They’re competing in Intel’s Make it Wearable contest, and their drone, Nixie, is one of the finalists.

The quadcopter that Kohstall and Team Nixie built is, in Kohstall’s words, “a flying wristband.” With a single gesture, the user deploys the quadcopter, which then flies a short distance away, turns around, takes a picture, and flies back to the user’s wrist.

The group built Nixie using Intel’s modular Edison chip. A demo video shows a mountain climber deploying the drone while scaling the side of a mountain, a situation that perfectly demonstrates the appeal of photography drones to chronicle experiences without interrupting them.

“We all have moments we want to remember,” says Nixie project manager Jelena Jovanoic. “Nixie takes the picture that you wish you had always had, but couldn’t, because you didn’t want to stop the action.

The winner of the Intel wearable technology contest’s “development track” will be announced on November 11.