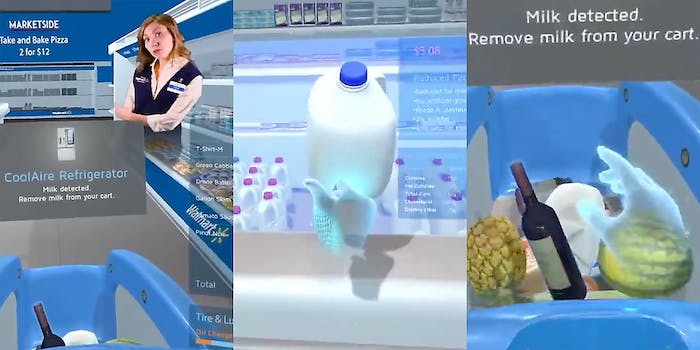 A video of a Walmart shopping experience in virtual reality (VR) went viral across social media this week, spurring a wide range of reactions on the supposed future of shopping.

The video, posted to Twitter on Monday, shows a first-person view inside of a bleak Walmart as a virtual torso guides you through a digitized shopping experience.

The footage has thus far racked up more than 10.7 million views on Twitter and nearly 400,000 on TikTok. On TikTok, the user called the video “cringe.” It has led many users to discuss the supposed dystopian future that awaits humanity. Others argued over the pointlessness of shopping in a virtual space given that simply ordering groceries online would be both quicker and more efficient.

But the video actually isn’t new. And you shouldn’t expect your Walmart shopping experience to enter the virtual realm overnight.

The clip is actually a 2017 VR demo developed for Walmart by the tech company Mutual Mobile. The footage was first shown at the South by Southwest (SXSW) festival that year and was later presented at a Walmart shareholder event.

Mutual Mobile responded to the newfound interest in its demo by sharing on Thursday a longer version of the clip to its Twitter profile.

“Here’s the full video of our Walmart VR store concept demo!” the company wrote. “Almost 5 years later, this demo is proof of how experimental VR once was and how far it has come today!”

Once again, the replies were filled with comments from puzzled users struggling to understand the point.

“I mean this is pretty cool conceptually but, If I still have to go out to do this, why not just go in the store?” one user asked. “This would be needlessly complicated. I rather see what I’m buying anyway.”

The video appears to have gone viral due to the current interest in the “metaverse,” the virtual world currently being constructed by major tech companies such as Facebook.