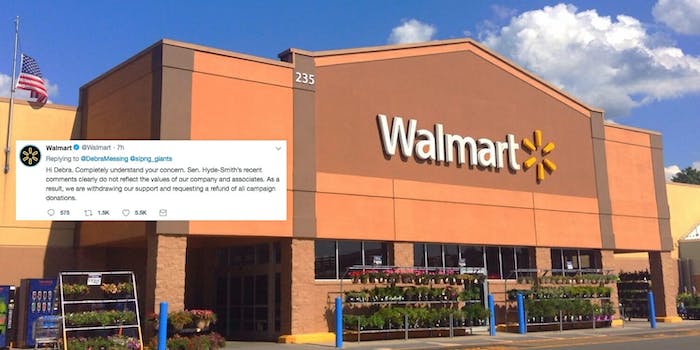 The company came under pressure after FEC filings were made public.

Walmart announced on Tuesday that it was asking Mississippi’s Republican Senator Cindy Hyde-Smith to refund its campaign donations amid mounting public pressure following controversial lynching comments she made earlier this month.

In a tweet published Tuesday from its official account in response to a post by actress Debra Messing, sharing an article about the donation, the company said that: “Sen. Hyde-Smith’s recent comments clearly do not reflect the values of our company and associates.”

Hi Debra. Completely understand your concern. Sen. Hyde-Smith’s recent comments clearly do not reflect the values of our company and associates. As a result, we are withdrawing our support and requesting a refund of all campaign donations.

On Nov. 2, ahead of the midterm elections, Sen. Hyde-Smith was attending a campaign stop in the city of Tupelo when she made the comment, referring to a local rancher standing beside her.

The comments were reported across the country and resulted in widespread criticism.

Mississippi has a sordid historical record among states for its number of racist lynchings perpetrated against Black men and women. Sen. Hyde-Smith’s midterm Democratic challenger Mike Epsy, who she is in a run-off against, is Black.

Most notably, Walmart’s $2,000 campaign donation to Sen. Hyde-Smith was made on Nov. 19, more than a week after her “public hanging” remark. The contribution was revealed in a Federal Election Commission filing.

Real pressure only came when the company was featured as one of several corporate donors highlighted in a report by Popular Information, all of which had donated since the comments.

Since Monday, amid public outcry, the companies have condemned the comments and most stated they would seek a refund.

Remarks like those made by Senator Hyde-Smith are offensive and an affront to everything we stand for as a company. The money was sent before the remarks were public. If Leidos had been aware, we would not have made the contribution.

We were not aware of Senator Hyde-Smith’s remarks when this contribution was made on November 8, and we have requested a refund. We reject the Senator’s statements, which are not aligned with our company’s core values.

Google made a statement to the Daily Dot, claiming that its money was sent before the comments were made (although they appear on a Nov. 13 filing) and said that it would not have contributed to the Republican’s campaign had executives been aware of the remarks. They did not comment on whether they would ask for the donation back.

Hyde-Smith’s run-off against Espy is Nov. 27