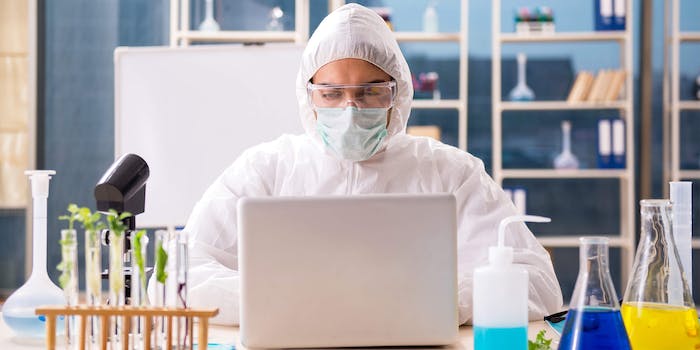 How the coronavirus is affecting the dark web drug market

Buyers and sellers of Chinese-produced 'research chemicals' deal with delays, doubts, and downtime.

The effects of the ongoing coronavirus outbreak on the exportation of Chinese goods have been significant. Companies across the globe that rely on the East Asian country’s manufacturing prowess have been faced with continued supply-chain disruptions.

Analysts have warned that American consumers could begin noticing missing items on store shelves as early as mid-April, as retailers struggle to restock everything from electronics to clothing.

But for a small corner of the dark web and the larger internet as well, the concern isn’t over the availability of laptops or sneakers, but unregulated grey market drugs known as research chemicals.

These synthetic substances produce similar effects to illegal street drugs but often remain legal given their chemical structure. 2C-B, for example, was popularized in the ’80s as a legal replacement for MDMA or Ecstasy. The compound was designated as a Schedule I drug in the U.S. in 1994 and became illegal to buy, sell, or trade.

Given that much less is known about research chemicals than conventional drugs, health professionals warn that taking such substances can be dangerous. But the lure of an unregulated high remains appealing to both users and those looking for monetary gain.

China has long been labeled the world’s largest exporter of synthetic drugs, whether research chemicals or fentanyl, the highly-potent opioid fueling overdoses in the U.S. But with the emergence of the coronavirus, those who rely on Chinese laboratories for their quasi-legal highs are now faced with a new uncertainty.

Users of the popular Reddit-style dark web forum “Dread” have expressed fears in the last several weeks over the volatility caused to the community by the ongoing pandemic.

“The coronavirus is killing my business,” one small-time vendor alleged.

Another user, a research chemical wholesaler known online as 0yinbo, told the Daily Dot that the outbreak has likewise interfered with his ability to make purchases. 0yinbo said his supplier in China had not provided a timeframe either for when business should return to normal.

Some sellers have attempted to reassure consumers with notices on their websites. The Grateful Chemicals, a Hong Kong-based research chemical supplier which runs sites on both the dark web and the open internet, apologized to customers for delays last month.

“Friends, we are sorry but the situation in China is not optimistic and it appears that the shipping companies will not be active for the next two weeks due to the virus,” the site said in late February.

The Grateful Chemicals claims that its products are specifically for “individual and/or corporate laboratory research and analysis.”

“All the Products offered on this website are sold only for educational and research purpose only and are not sold for human consumption or illegal use,” the company’s terms and conditions state. “The chemical, physical, and toxicological properties of these chemicals have not been fully investigated and are not guaranteed.”

Items on the site range from little-known hallucinogens and stimulants to nasal sprays containing “EtaZe,” a synthetic opioid touted as a “safer heroine and fentanyl replacement” that is “legal worldwide.”

While some research chemical sites make it a point to let users known whether a certain drug is illegal in their country, others don’t.

An active user in one of Reddit’s larger research chemical subreddits who asked to remain anonymous also told the Daily Dot that supply-chain disruptions have persisted since the outbreak began. The user still hadn’t received his product, a drug similar to Ketamine known as 2-FDCK, nearly two months after making the order.

“I would be willing to bet that even if the coronavirus started declining rapidly, that we won’t see the brunt of the economic and supply chain impact for a few months possibly,” the Reddit user said. “I feel like it has just begun to show itself.”

Most of the issues appear to be linked to shipping as opposed to problems at chemical factories, many of which slowed down production following the outbreak.

The Daily Dot reached out to ChemBuyersGuide, a U.S.-based site that links users to chemical suppliers in China, to inquire about whether supply-chain problems have continued. The site forwarded the inquiry to the president of a Chinese chemical company who did not reply.

For some vendors, things do appear to be on the upswing. The Grateful Chemicals, which warned of significant disruptions last month, has since stated that shipping from China has resumed.

The vendor on Dread who previously claimed that the virus was “killing his business” now says things are returning to normal as well, although prices have increased for the time being.

“RC [research chemical] markets/factories in China just back to production,” the user said in broken English. “So most of RC chems are still short in market. Some of them price raised a lot. I think the price, the supply, will be normal in April.”

As China orders its citizens out of self-quarantine, however, some experts fear that the virus will tighten its grip once again, causing all the previous issues to reemerge.

A new sub-community on Dread has since been created for the sole purpose of discussing the coronavirus. But even with shipping more or less restored from China, worries remain about the near future.

Several users have expressed fears that the coronavirus could even hitch a ride with their package, causing them to become infected when purchasing drugs. But experts say there is no evidence that the virus can survive the harsh conditions of transit, especially during the long trip from China.

Still, that hasn’t stopped at least one vendor from using the concern to pitch his business.

“Please do not worry when making an order from us,” the vendor said. “We live far away in the nature with no people around us.”