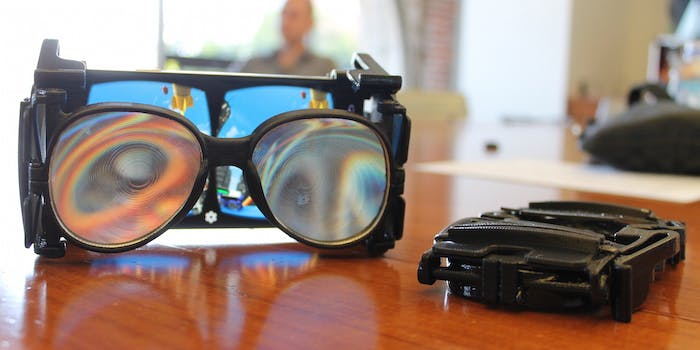 This cheap, 3D-printed VR headset could shake up virtual reality

And these goggles are better than anything out there.

If you ask the creators of the Wearality Sky virtual reality goggles, they’ll tell you they don’t want to compete with Oculus or Samsung. Instead, their VR headset will quietly undercut the competition’s price and can be powered by almost any smartphone.

Wearality Sky is a 3D-printed pair of goggles that folds up and fits in your pocket. Your phone can slide into a slot directly in front of the lenses, similar to Google Cardboard, and clip on the top of the goggles. You can also mount the device on a baseball cap if you don’t feel like holding your hands up while viewing content. The Wearality Sky can play nice with any five-or six-inch phone.

David Smith, cofounder and CTO of Wearality, has worked on manufacturing an affordable consumer pair of virtual reality goggles for five years.

“The problem with virtual worlds and virtual reality is that it’s terrible. You come at this as a programmer or software engineer to realize that the limiting technology is optics,” Smith said in an interview with the Daily Dot. “Not knowing anything about optics, we wanted to fix it. And that’s what really differentiates us from everyone else—everyone is trying to fix this problem with software.

“Hardware is the new software; you can’t draw a line between them anymore. This project particularly shows that.”

The device is thoughtfully designed with large, laser-cut lenses that might be mistaken for sunglasses, were they blacked out and not displaying VR content. It is completely portable, with a full 150-degree field of vision—more than your typical IMAX theater. And Wearality Sky works with apps made for Unity, Cardboard, Unreal, and Unigine platforms.

Smith works at aerospace and defense firm Lockheed Martin, and that partnership contributed to the rapid development of Sky. While Lockheed doesn’t own a stake in Wearality, it does retain the rights to develop products like flight simulators based on Wearality’s tech.

I tried out Sky during a demonstration at Autodesk in San Francisco, and was impressed. There was zero latency between my head movements and screen controls, and despite only being held up to my face, not wrapped around my head with an elastic band, I felt completely immersed on a roller coaster ride.

One of the biggest benefits to Sky is a design feature called “exit pupil,” which roughly means the lenses don’t necessitate any adjustment from the end user. Whether your eyes are far apart or close together, you get the same experience. Gunnar Wieboldt, cofounder and COO of Wearality said some people are so impressed with the lenses, they are trying to figure out how to modify them to include in other headsets like the Oculus Rift.

“It doesn’t matter where your eyes are,” Smith explained. “They can move up or down, left or right, and it’s got very comfortable optics.”

Smith is a pioneer in the virtual reality space, building the first real-time 3D adventure game The Colony back in 1987. He also worked with filmmaker James Cameron to visualize and build his set for the 1989 thriller The Abyss.

Wearality launched a Kickstarter campaign and successfully raised $117,650 earlier this month. The company is expected to ship the pre-ordered products within the next month, and make Sky available to everyone for around $70 this fall. Because 3D printing is relatively inexpensive and accessible, the company is able to manufacture large numbers at a low cost, passing on savings to the consumer.

The crowdfunding campaign didn’t take off immediately: VR enthusiasts were skeptical of Sky. They thought the technology sounded almost too good to be true. To turn doubters into believers, Wearality took to Reddit to answer questions, and even hosted in-person events for people to try the goggles themselves.

Virtual reality has yet to become a must-have consumer product in the same way gaming consoles, mobile devices, and computers have. But with Samsung and Oculus planning wide product launches, we might be approaching a time of intense interest around VR—a category of technology that gets so much love in the tech press, but so little in our living rooms.

Wieboldt predicts the Sky headset could be used for entertainment purposes, including movies, gaming, and concerts. Other uses like sharing panoramic photos, teaching through immersive education, and watching live-action sporting events could become selling points for the seriously cheap 3D-printed product.

For Wearality, Oculus is the Ferrari of virtual reality. Sky is a sedan: accessible for everyone, and much less expensive.