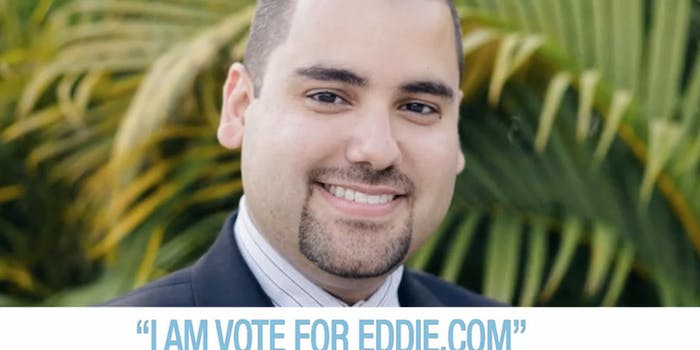 The House of Representatives candidate, formerly known as Eddie Gonzalez, is running on a platform of energy independence.

Eddie Gonzalez knew he was a long shot to not only get people to choose his name when voting for Congress, but even to get people to visit his campaign website.

So he cut his losses and made them one and the same.

Gonzalez, 31, has legally changed his name to that of his domain, Vote For Eddie.com. He’s even tweeted a picture of his completed petition to get on the ballot, showing that the campaign is registered under his nom de Internet.

Eddie.com has his work cut out for him. Running as an independent in Florida’s 21st District, he’s up against Republican Mario Diaz-Balart, who’s something of Cuban-American political royalty. Diaz-Balart’s brother held that position before him, and his father was the majority leader of Cuba’s House of Representatives.

But Eddie.com seems undetterred. Running as an independent, he’s has created a stirring YouTube ad to highlight his major platform: energy independence.

Though Eddie.com is still seen as a long shot, he at least has one thing going for him: Diaz-Barlart’s supporters probably still have to Google his campaign page.