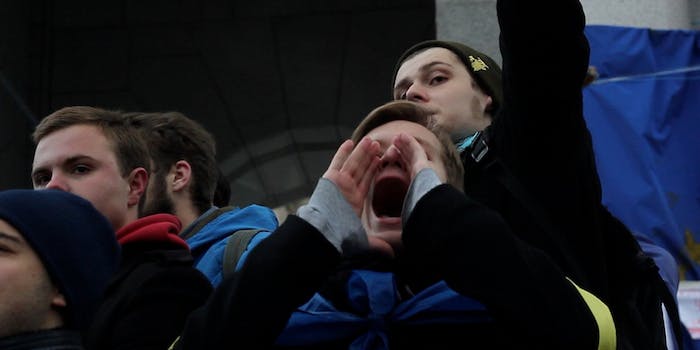 The protesting began after the country’s president, Viktor Yanukovych, abruptly withdrew from trade negotiations with the European Union on Nov. 21. Since then hundreds of thousands of Ukrainians have taken to the streets demanding he be removed from office.

As the KyivPost reported, the telecom provider issued a press release stating that because of the potential safety risks involved in major protests, the company is attempting to provide free wireless access throughout the city through Dec. 2.

To do this, the provider is boosting every customer’s Internet connection to the maximum speed. It is then encouraging these customers to remove the password protections from their networks and notify the company that they have done so. The end result is a dynamic map displaying free Wi-Fi hotspots throughout the city.

The company stated that its official reason for boosting service is to support emergency communications during the dangerous protests. “We’re witnessing the force actions that are threatening human lives and health,” it said in a statement to the KyivPost. “That’s why we’re opening the possibility for emergency calls and to contact relatives online.”

However, intentional or not, one side effect will no doubt be that protesters will more easily be able to organize and stay in close contact. As the Occupy movements, along with the Arab Spring and protests in Turkey have shown, social media platforms have played an increasing role in popular uprisings.

In many ways, Internet access is an appropriate weapon in the ideological battle being waged on the streets of Kiev right now.

For many Ukrainians, the political and trade agreements with the European Union were, for better or worse, a chance to transform into a more modern country. “I’m not part of any political party but I understand that only by trying to be more European can we end our troubles. Even from my own experience, I see so many problems with the medical system, and we just need to modernise,” a Ukrainian oncologist told the Guardian.

The agreement was part of the EU’s “eastern neighborhood policy,” which was intended to strengthen ties between Western Europe and the post-Soviet states. Though Russia’s president Vladimir Putin said he took no issue with the potential arrangement, the timing of Yanukovych’s withdrawal, after a secret meeting with Putin, suggests otherwise.

As it stands now, Yanukovych said he will begin negotiation with the Russian-backed Eurasiatic Customs Union instead.

Whether or not the increased Internet access will be used to rally protesters on the streets is unclear. But elsewhere, social media is being used as a platform for foreign diplomats to voice their concern. Sweden’s foreign minister Carl Bildt has this to say on Twitter: