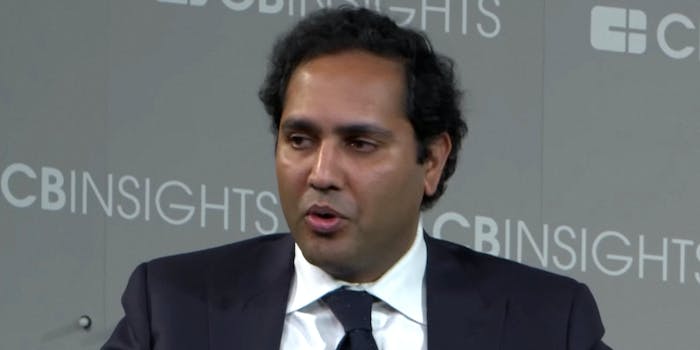 Vishal Garg and his company are getting savaged on Blind, where he wrote his comments.

Late last week, the chief executive officer of Better.com fired 900 employees in a brief Zoom call. Vishal Garg, who also founded the mortgage company, then went on the anonymous reviewing site Blind to trash the people he’d just laid off.

The layoffs come on the heels of Better.com receiving a $750 million investment. The company, often described as a $7.7 billion unicorn, announced that it was going public last June.

After firing nearly 10% of his staff, Garg went on Blind and wrote that “at least 250 of the people terminated were working an average of 2 hours a day while clocking 8 hours+ a day in the payroll system.” He accused them of “stealing from you and stealing from our customers” in comments Fortune reports he confirmed making.

Garg is reportedly unrepentant. “I think they could have been phrased differently, but honestly the sentiment is there,” he told Fortune.

Screenshots of Garg’s comments circulated widely on Blind and other platforms.

Some defended him, but overall Garg and his criticisms of the people he fired were not well received.

“How in the world is he a Billionaire?” one Blind user wrote in a thread about his comments. “His website searches for mortgage rates for God’s sake. And it doesn’t even populate the cheapest rates.”

“This guy is talking like he’s inventing the next Google or Apple,” another said. “This clown runs a mortgage business. Wtf is he talking about.”

Other people also posted previous comments attributed to “uneducated,” which Garg told Fortune is his username.

Usernames on Blind are unique, but it is possible that someone else previously went by “uneducated,” identified themselves as an employee of Better.com, and aggressively defended the company on the platform. Better.com did not respond to the Daily Dot’s emailed inquiry sent Monday morning seeking to confirm whether Garg made the previous comments.

One commenter claims that Garg once replied to an engineer asking if they should quit: “Leave now and save us both the trouble. You’re likely super well paid.”

“Email me directly and we will pay you to leave early so we don’t sit here waiting for you to show up with your end of the work that needs done, and then get left holding the bag.”

In other screenshots of Garg’s purported comments, he told a critic, “You should quit and go work elsewhere if you are this unhappy with senior management.”

“I also answer customers [sic] emails directly myself while you are probably sitting on blind or Twitter or what not twiddling around blaming others for your own failures,” it continued.

Last June, someone started a thread asking about the corporate culture at Better.com. Some of the comments were positive. Others were brutal. One person who identified themselves as an employee of a different company claimed Garg and another executive “messed up the culture” but said it was still a “great pre-ipo (initial public offer) company.”

A person claiming to work for Better.com added, “CEO only wants quick, immediate wins by throwing tons of disposable labor at the problem.”

“Leadership has no idea how to lead,” wrote yet another.

Later in the same thread, uneducated weighed in to defend Better.com. After flouting claims about its revenue and growth, uneducated wrote, “Some smart people are ok with volatility. … The Fancy people with the snow plowed parents and the fancy degrees don’t usually do well in the jungle.”

“No one gives a shit that you got into Harvard or Stanford and then got a job at name your Silicon Valley and then came here when we all know your parents spent $50k a year from pre-k to 12 helicoptering you over every pothole,” they added.

Later in the same thread, uneducated wrote, “Go back to the minor league silly valley Care Bears bullshit bubble you came from.”

“You either win or you don’t,” they continued. “And if that makes me an asshole, I am proud to be such. A happy Bronx cheer to you. Now get the fuck out of here.”

An anonymous user commented on the post, “Vishal seriously did you get drunk and decide to come on here and troll everyone? You are so fucking childish.”

Such statements wouldn’t be out of line with Garg’s communications style. As Forbes reported last year, Garg once sent staff an email calling them “dumb dolphins.”

Update 9:26am CT, Dec. 8: According to a post on Blind, Garg offered an apology for his behavior, saying he could have handled the layoffs better.