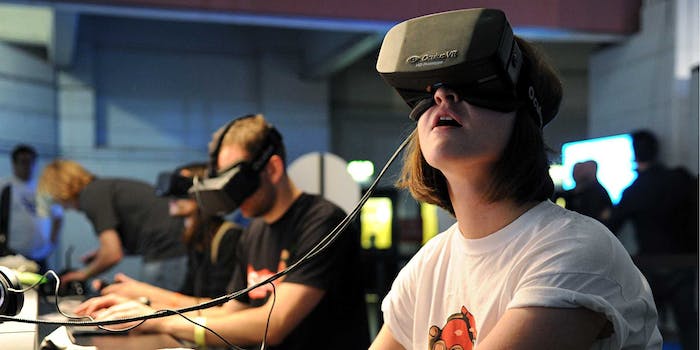 New technology will enable us to touch things in virtual reality

One step closer to the Matrix.

Virtual reality is the next frontier for gaming and other interactive software, but while everything from the Oculus Rift to your own Android smartphone can show you another world, you’ve never been able to touch it. But tech gurus in Japan want to solve that problem, and recently revealed a prototype that lets users feel objects in a virtual world.

A company called Miraisens dreamt up a new device that can be used in conjunction with a virtual reality headset. It’s a funky accessory that straps onto the user’s wrist and attaches to his or her finger, or is held in his or her hand to provide haptic feedback, which is really just a fancy term for some type of simulated physical response to your actions.

The result is a sense of touch to accompany the sights and sounds that virtual reality devices already provide. So for example, when the user reaches out to interact with a virtual object, the arm-mounted device creates a vibration on the finger or hand that simulates a touch.

Without some sort of physical feedback, virtual reality is actually quite limited. If you’re only capable of interacting with what you can see or hear, it’s just a fancier medium for the same experiences we can already have with a TV screen and a game controller. Adding touch makes the virtual world far more real, and allows you to interact with the world itself, even if you can’t see it.

Imagine pitching a baseball in a virtual reality scenario: Without some type of physical interaction, you have to suspend your disbelief that you’re not actually holding a baseball. But what if you could feel an object—in this case, a baseball—in your hand, even as it rests at your side? As you swing your arm to release your pitch, that feeling leaves your hand and you see the ball travel to its destination.

The potential applications for technology like this extend quite far, and Miraisens claims it’s working on commercializing the technology, meaning that it should eventually find its way to consumers. The company also notes that the haptic feedback can be built into objects of all shapes and sizes, so the potential for a very NSFW virtual reality milieu is alive and well.