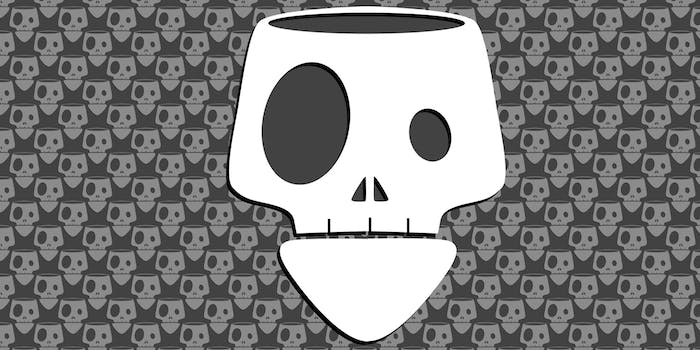 A political meme is turning very real in Vietnam.

Police in Saigon raided a politically charged “zombie” meetup last Saturday, detaining multiple people who wore matching T-shirts inspired by an online protest group. Young Facebook users in Vietnam who dislike the ruling Communist Party but don’t fight it, as the meme goes, are an army of zombies.

The zombie movement is inspired by a song called “DMCS (??t M? C?ng S?n / Fuck Communism),” by rapper Nguy?n V? S?n, also known as Nah.  The popular song and its subversive lyrics inspired offline action and online protest: people around Vietnam took to Facebook walls and physical walls to declare “Tôi Không Thích DCSVN” (“I don’t like the Communist Party of Vietnam”), and gave rise to the popular hashtag #DMCS.

The zombie logo, which gave rise to anonymously created t-shirts, keychains, and other apparel, comes from the song’s lyrics:

The whole generation has been brainwashed. What a misfortune!
They’re like zombies that will only waste our bullets
Hate the Communist Party but won’t fucking dare to speak up–you’re as good as mute

The group had publicly planned the meetup for days. Outfitted in matching zombie t-shirts, they made their way to the meeting location on Nguy?n Hu? Boulevard in the middle of Saigon’s District 1, only to unexpectedly encounter security police.

Nguy?n Thanh Ph??c, an organizer for the movement, was among the group of attendees escorted into waiting police vehicles and into custody. Ph??c, who also goes by Nguy?n Phi, is a 23-year-old fellow rapper who’s helped solidify the zombie movement.

By Sunday, police had released all other activists but Phi. On Monday, five officers took him to his home, which they raided for zombie t-shirts. In the process, authorities confiscated his computer. At the time of this writing, Phi is still detained at the Ministry of Public Security Detention Center (PA 24) on Phan ??ng L?u Street. No arrest warrant has been issued.

In recent years, Vietnamese authorities have arrested hundreds of activists and human rights defenders and sentenced many to long prison terms. It is common for activists to be arbitrarily detained for months without formal charges or any arrest documentation.

Phi’s friends speak to his passion for the community and dedication to the human rights movement. In support, fellow activists have begun using the hashtag “#FreePhi” to call for his release and have changed their profile photos to the zombie logo. Friends have posted messages of support on his Facebook wall. As one youngster wrote, “Stay strong, brother Phi. The zombies are opening their eyes.”