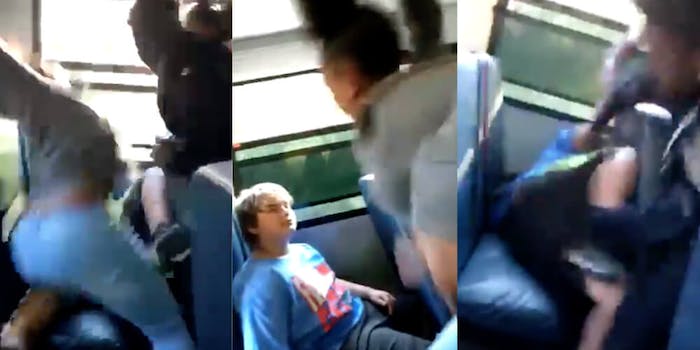 The school district and sheriff's office said the incident was not politically motivated.

A video of a white 14-year-old boy getting beat up on a school bus by a group of Black students has gone viral.

Five students involved in the incident have been charged with a misdemeanor battery, according to WCTV-TV.

On Nov. 21, the boy’s mother, under her Twitter handle @AmericanDiaries, posted a photo of her son in a hospital bed.

“I am sitting in the hospital with my 14 year old kid because he was just jumped by 8 black kids on the school bus, I guess that’s what happens when a kid wears a #Trump hat to school. And who’s the violent ones again? Earlier today they poured milk all over his head,” she captioned the photo.

On Dec. 12, she posted the video, saying her lawyer gave her permission to do so.

Upon releasing the video, the mother changed her story to include five kids instead of eight.

“Keep in mind this is only the first 21 seconds of the video,” she wrote, along with the video. “Please RT to have these two girls and 3 boys held accountable.”

The video shows a girl hitting the boy with her fist as he unsuccessfully tries to defend himself. Other students are seen throwing in the occasional punch. The majority of the video shows the boy in a fetal position protecting his face and head.  There seemed to be no intervention from anyone at the time of the incident.

Outrage on Twitter poured in after his mother claimed the vicious altercation was the result of her son wearing a MAGA hat to school and voicing support of Trump. In the video, the boy does not appear to be wearing a MAGA hat.

“Where are our establishment religious leaders preaching against hatred. The evangelical leaders seem to be the only ones affirming the values taught by Jesus Christ. It’s time for the Catholics, the Episcopals, the Orthodox, etc to speak…” Giuliani wrote in response to a tweet by conservative activist Charlie Kirk.

This hatred of Trump is unwarranted. Where are our establishment religious leaders preaching against hatred. The evangelical leaders seem to be the only ones affirming the values taught by Jesus Christ. It’s time for the Catholics, the Episcopals, the Orthodox, etc to speak. https://t.co/pCjCxcVF69

The superintendent of the Hamilton County School District sent out a letter addressing the incident. It stated that after an investigation was conducted, there was no evidence to suggest the fight was politically motivated nor was there any evidence of the alleged MAGA gear.

“The incident began with a verbal altercation between two students that escalated when additional students became involved,” the letter reads.

The Hamilton County Sheriff’s Office released its own statement, in which it said that “the incident does not meet criteria for a hate crime” and that “misinformation has been passed along with the video.”

Since the video went viral,  a GoFundMe has been set up for the boy and has since raised over $600.