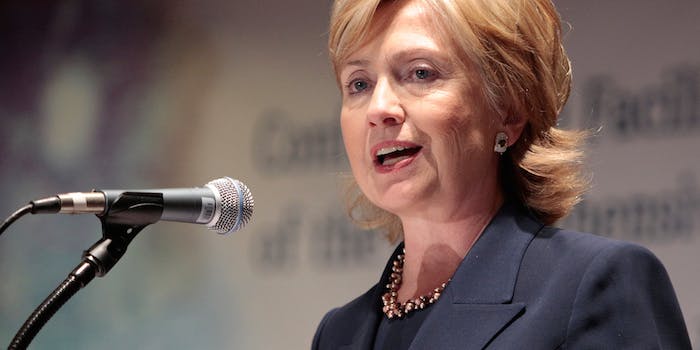 The Official CTBTO Photostream/Flickr (CC BY 2.0)

'You’re not going to change every heart. You’re not.'

Hillary Clinton had a few words of advice for the Black Lives Matter movement during a recent closed-door meeting.

The meeting, which took place on Aug. 11 in Keene, New Hampshire, focused on the war on drugs, its effect on African-Americans, and wider “anti-blackness” as described by the activists.

The Clinton campaign says it reached out to the Black Lives Matter activists prior to a Clinton event, which the activists planned to disrupt. Clinton’s camp was open to having reporters in the room, but the activists did not want it to be recorded, according to the campaign.

The conversation focused on the expansion of prison funding and prisons in U.S. during the Bill Clinton presidency in the 1990s, during which time Hillary Clinton played key roles.

Without addressing the rising prison population during the Bill Clinton presidency, Hillary argued that the Black Lives Movement activists and related movements need to focus on legislation and court cases to really make a difference.

The activists also asked about Clinton’s heart as well as the hearts of white Americans.

Clinton’s advice appears to have been met with frustration by the activists.

“I say this as respectfully as I can,” one activist responded to Clinton, “but you don’t tell black people what we need to do. And we won’t tell you all what you need to do.”

Photo via The Official CTBTO Photostream/Flickr (CC BY 2.0)