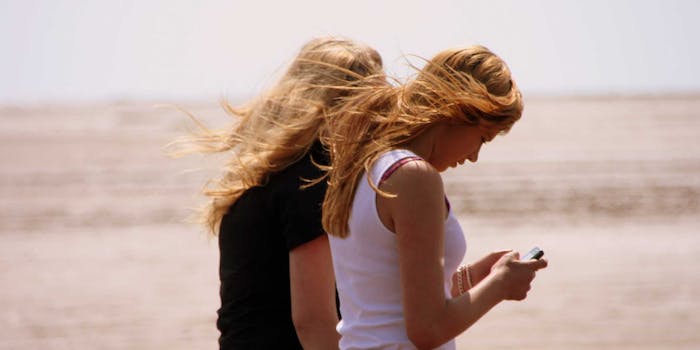 If you’re a fan of the West Wing, you’re plenty familiar with the famous “walk and talk.” The far-less-compelling IRL counterpart is texting and talking, an act that has become so common at one school that a specific lane has been installed for those who can’t pry their eyes from the screen of their phone.

Utah Valley University, in response to a “culture of walking and texting,” has painted lanes on a staircase leading to the school’s new Student and Wellness Center. The partitioned part of the stairwell isn’t literally meant to keep texters separated but rather just to draw attention to the fact that some students spend too much time with their face buried in their phone—and if it prevents a couple collisions, that’d be fine, too.

My university has added lanes to our stairs pic.twitter.com/0XQXS2UAYI

There is precedent for this installation, humorous though it may be. Chinese city Chongqing designated a special sidewalk for the phone-obsessed, giving them their own walkway instead of allowing them to clog other paths with their slow, head-down walking.

Texting while walking has also been found to be a legitimate health concern, both for the texter and for other pedestrians who turn into potential bowling pins. A study conducted by Stony Brook University found people who walk while on their cell phone are 61 percent more likely to stroll off course and 13 percent more likely to miss their destination. The Ohio State University found emergency room visits related to cell phone use tripled between 2004 and 2010, with pedestrians aged 16 to 25 being the most at-risk to incur injury while walking with phone in hand.

The message sent by Utah Valley University is clear: Texters, stay in your lane.