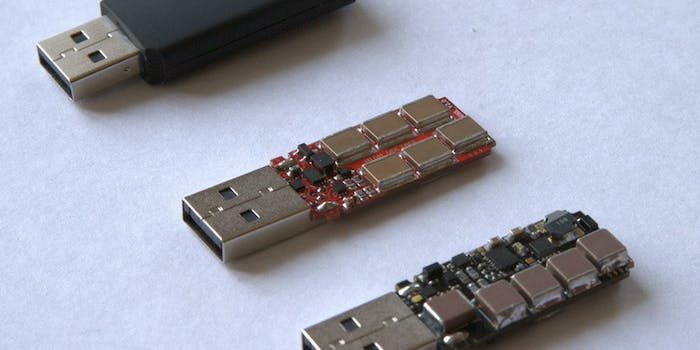 The USB Killer 2.0 is a flash drive that can zap a computer to death

If you see this flash drive, grab your computer and run.

If you need to kill a computer instantly, the USB Killer 2.0 might be the weapon for you.

Hackers have used flash drives, also known as USB sticks, to deliver malicious software for years. But the USB Killer skips all those subtleties. Instead, it delivers a 220-volt burst of death to the target machine, frying the hardware.

The USB Killer 2.0, created by a Russian researcher appropriately nicknamed Dark Purple, can take down anything with a USB port.

The exact extent of the damage is unclear, but Dark Purple believes that fixing it would just be a matter of replacing the machine’s motherboard.

The first version of the USB Killer only attacked its target with half the voltage of the second model. It was also a highly conspicuous circuit board. The updated model is both sneakier and more powerful.

Even without a knockout blow of electricity, unknown flash drives have always been a danger to computers. They’re convenient ways for hackers to deploy powerful and infectious malware, and unattentive computer users make easy targets.

To protect your computer and your data, only plug in flash drives that you know you can trust.

You won’t find the USB Killer 2.0 on Amazon, but it should be no surprise that the Russians reading about it immediately wanted to know how to buy the clever little device.