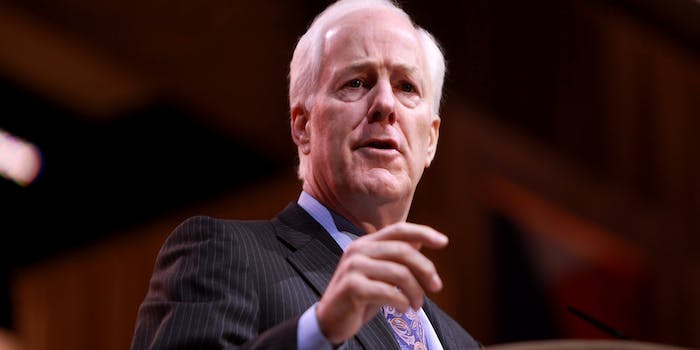 The bill that could dramatically reform the national security apparatus is mired in Washington gridlock.

Less than two weeks after the Republican Party’s decisive victory in the midterm elections, the U.S. Senate is in the middle of a lame-duck-session squabble over the most significant privacy legislation in a decade.

The USA FREEDOM Act, sponsored by Sen. Patrick Leahy (D-VT) in the upper chamber, has been endorsed by the civil liberties groups like the Electronic Frontier Foundation (EFF) and the American Civil Liberties Union (ACLU). It has picked up endorsements from the editorial boards of major newspapers like the Los Angeles Times. Liberal advocacy groups like Free Press and Demand Progress have organized letter-writing campaigns to spur forward movement. Despite the watering-down of its companion bill in the House, sponsored by Rep. Jim Sensenbrenner (R-WI), privacy watchdogs generally remain optimistic that the final legislation will rein in a national-security bureaucracy whose overreaches and failures have been laid by almost two years of leaks and disclosures.

In the past few days, however, countervailing political sentiments from each side of the aisle have threatened the bill’s prospects for success in the Senate. After downplaying the importance of passing the bill in September, Senate Majority Leader Harry Reid (D-Nev.) on Wednesday night took an initial step toward introducing the bill for a full Senate vote. He filed a motion for cloture, which will require 60 votes to pass. The Democrats only control 53 seats, and there are 2 Independents who caucus with them.

Sen. Leahy praised Reid’s decision, calling on the Senate to “take up and pass the bipartisan USA Freedom Act, without delay.” But Senate Republicans criticized the last-minute move by the majority leader, who will become the minority leader when the 114th Congress is seated on Jan. 3. Politico’s Morning Tech newsletter reported on Friday that Senate Minority Whip John Cornyn (R-TX) said he was “uncomfortable trying to jam through” the USA FREEDOM Act before the transfer of power.

Meanwhile, some Senate Democrats remain noncommittal about passing Leahy’s bill, even as the window of opportunity for controlling the process slips away during the current lame-duck session. According to Morning Tech, Senate Intelligence Committee chairwoman Dianne Feinstein (D-CA) “still has some problems” with the act. A Leahy aide said the two senators had been “working for months” to resolve their differences.

Supporters of the bill feel that they are very close to a win. “This thing is literally sitting at the finish line,” the Center for Democracy and Technology’s Harley Geiger told the Hill.

“He has been relentless and we’re quite appreciate of that,” said the ACLU’s Laura Murphy, also speaking to the Hill.

Yet even as groups like Free Press and the ACLU profess support for the Senate’s version of the USA FREEDOM Act, those same organizations are concerned about the House’s already-passed version. In May, after the House version passed, the CDT’s Geiger told Ars Technica, “We withdrew support for USA Freedom when the bill morphed into a codification of large-scale, untargeted collection of data about Americans with no connection to a crime or terrorism.”

The hope of these groups is that, once the Senate passes its bill, the conference commitee that meets to reconcile House and Senate versions of legislation will add back the strong provisions that the House version dropped. Internet freedom group Restore the Fourth issued a statement to this effect following the House vote. Alex Marthews, the group’s national chairman, said, “The only merit in the bill having passed is that it provides something with which the Senate’s superior version of the USA Freedom Act can be reconciled in conference.”

As the Senate gears up for a cloture vote on Leahy’s USA FREEDOM Act that is unlikely to succeed, one lone Republican voiced his support for Majority Leader Reid’s decision to call for a lame-duck vote: Jim Sensenbrenner, the House bill’s Republican sponsor.

“There is no excuse not to pass this fundamental piece of legislation during the lame duck,” Sensenbrenner said in a statement. “Once the Senate acts, I encourage my colleagues in the House and the President to be prepared to promptly enact it into law.”

With Republicans already measuring the drapes in the majority leader’s office and senators like John Cornyn decrying a lame-duck vote, it seems unlikely that Sensenbrenner’s hopes will be realized.