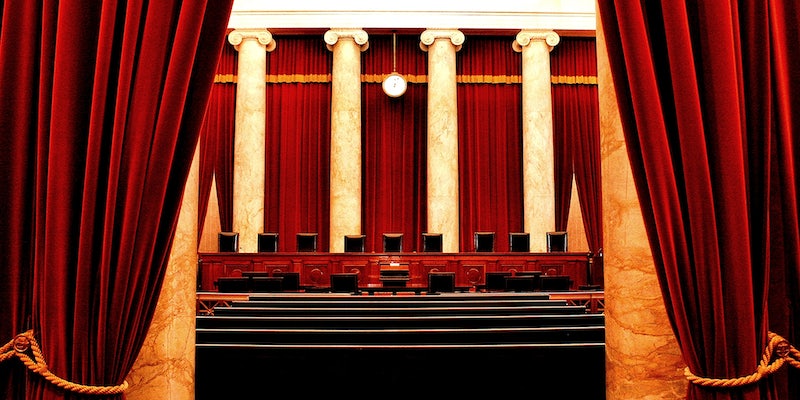 Just imagine how epic Supreme Court photoshop battles would be.

In recent weeks, the United States Supreme Court has had to grapple with a a lot of different technologies. It ruled on the legality of police warrantlessly searching smartphones and services that stream broadcast TV content over the Internet. Before the year is out, the country’s highest judicial body will decide precisely what constitutes a ?threat” made against someone over social media.

These decisions have shown that the members of the court, who range in age from 54 to 78, are hardly Luddites. Yet, there is one century-old technology to which the court has consistently and uniformly failed to adapt: video.

The only way for someone to see what’s actually going on behind the Court’s closed doors is to be lucky enough to snag one of the few hundred seats available inside its ornate hearing room—both still and video photography of all kinds is prohibited. In an age when over 100 hours of video is uploaded to YouTube every second and transparency is increasingly viewed as a remedy for unaccountable government officials, televising the court’s oral arguments seems like a easy way to drastically increase government transparency, one that a recent poll showed is supported by 71 percent of Americans.

However, every single member of the Supreme Court has repeatedly blocked efforts to televise court proceedings—even those who vocally supported the idea before they were appointed.

The prohibition on photography in the Supreme Court dates back to 1946, when the Judicial Conference of the United States banned all photography and radio broadcasts in federal courtrooms. In 1972, that rule was expanded to include television.

In 1981, the Supreme Court has relaxed those rules considerably for everyone but themselves. The court held that states may allow recording devices of various kinds in their courtrooms if they so choose. To one degree or another, courts in all 50 states took them up on this offer. The highest courts of at least ten states stretching from Florida to Alaska all allow video recording, as do dozens of other lower state courts.

A few years later, then-Chief Justice William Rehnquist created a committee to study how cameras affected courtroom proceedings. Following a three-year pilot program testing the effects of cameras in courtrooms, the committee recommended that the implementation of video broadcasts be expanded. Instead of making cameras universal, the Judicial Conference of the United States decided to allow each federal court to make its own decision. The Supreme Court elected not to change its own policy.

The Supreme Court’s ban on cameras doesn’t mean that it’s impossible to get insight into what’s going on when court is in session. The court posts complete transcripts of all oral arguments to its website shortly after they are made. However, it was only in 2004 that the court finally identified what each justice said by name, which is how a Boston University study was able to prove conclusively that Antonin Scalia is the funniest person on the court.

The justices began releasing audio recordings of oral arguments in 2010, but video remains a bridge too far. Their reasoning on this issue essentially boils down to two main points: First, the fear that cameras will turn them into the type of grandstanding blowhards who populate congress; and second, that the vast majority of the public is essentially too dumb to really understand what they do.

These lines of thinking are pervasive among members of the court, even those who held beliefs that diametrically opposed to it before they accepted lifetime positions there.

During her 2009 Senate confirmation hearing, Judge Sonia Sotomayor, who previously served on an appellate court that allowed cameras, was asked about her opinion on cameras in the courtroom by now former Sen. Herb Kohl (D – Wis.), she not only insisted that her experience was largely positive, but said that she might, if confirmed, even attempt to bring her future colleagues around to the idea.

Yet, four years later, she told Charlie Rose the exact opposite. ?Most viewers [wouldn’t] take the time to actually delve into either the briefs or the legal arguments to appreciate what the court is doing,” she said.

The idea that allowing the media to create short video clips would rob viewers of the all-important context necessary to make sense of the often complex courtroom precedences is one regularly echoed by other justices.

Scalia told Congress in 2011 that he favored the introduction of cameras when he was first appointed to the court by President Ronald Reagan in 1986, but ?the longer I’ve been there, the less [of a] good idea I think it is,” he said. “For every 10 people who sat through our proceedings, gavel to gavel, there would be 10,000 who would see nothing but a 30-second take-out from one of the proceedings.”

The fear is that, if cameras were allowed, the news media might deceptively edit the clips to make it appear that justices supported outrageous or provocative positions that they actually don’t—maybe they were merely posing a hypothetical—or even just give the public a skewed view of how the court operates.

New York Times Supreme Court correspondent Adam Liptak slammed this position as an ?intellectual poll tax that could just as well justify limiting attendance in the courtroom to people smart enough and diligent enough to know what is going on.”

The other argument against letting cameras into the court is that it would change the way the court functions. By introducing a visual element, especially in high-profile cases, it arguably has the potential to transform what typically functions as an extremely collegial space for debate into the judicial equivalent of a soul-suckingly worthless cable news shouting match.

As Justice Anthony Kennedy insisted during an appearance before Congress in 2008:

The discussions that the justices have with the attorneys during oral arguments is a splendid dynamic. If you introduce cameras, it is human nature for me to suspect from time to time that one of my colleagues is saying something for a sound bite. … Please don’t introduce that insidious dynamic into what is now a collegial court. Our court works. We teach by having no cameras, that we are different. We are judged by what we write. We are judged over a much longer term. We are not judged by what we say.

While it seems unlikely that the sitting justices on the court will voluntarily let in cameras, there have been efforts by legislators to force them into it. Sen. Chuck Grassley (R – Iowa) has introduced a handful of bills over the years to this effect. Even though none of them have ever been successful, his 1999 effort has been credited with pushing the court to release audio of its proceedings.

Others have attempted to push the court in more forceful ways. Earlier this year, the campaign finance reform group 99rise.org clandestinely recorded a video during oral arguments of the McCutcheon v. Federal Election Commission case, which ultimately led to the court striking down overall limits to what any individual can contribute to political campaigns

Amazingly, this video was the first time anyone outside of the courtroom has seen an image of the court in session since a pair of photographs were smuggled out in the 1930s.

Ultimately, members of the Supreme Court may simply fear that any intrusion into their court room privacy has the potential to further push them into the fray of partisan politics that their lifetime appointments are designed prevent.

This dedication to upholding their own privacy sometimes manifests itself in ironic ways—most notably when the court struck down the constitutionality of protestor-free buffer zones around abortion clinics from within the confines of its own buffer zone that encapsulates the building’s marble plaza.

Pressure continues to mount on the justices to finally give the Supreme Court the same level of scrutiny that C-SPAN (which has repeatedly asked the court to let it televise proceedings) has subjected members of Congress to for three and a half decades. A public Change.org petition is one attempt to let the court know that there are people out there, ones who don’t have time to wait in line for days to see important arguments as they happen or pay professional spot holders $50 an hour to stand in line for them, who think the nation’s highest court still has work to do on transparency.

In a recent interview, retired Justice John Paul Stevens said that, while introducing cameras comes with some uncertainty, it may ultimately be for the best.

?Televising the court would be good for the court and for the country because I think people would realize that the justices are very thorough in their preparation for arguments and their understanding of the cases,” he explained. ?They ask intelligent questions. People, I think, are generally favorably impressed when they see the court at work.”