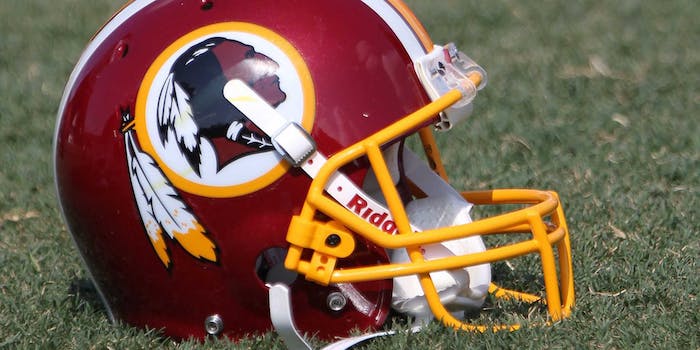 This doesn’t necessarily mean that the team has to change its name.

“This decision concerns only the statutory right to registration,” the decision reads. “We lack statutory authority to issue rulings concerning the right to use trademarks.”

What that does mean, however, is that the team and the NFL have very limited (legal) options when it comes to dealing with bootleg merchandise. Anyone, now, can sell ‘Redskins’-branded t-shirts and keychains—and for much cheaper than the official stuff. This undermines not only the Washington team’s profit margins but also, because of the NFL’s revenue-sharing model, every other NFL team’s as well.

The team is expected to file an appeal, of course—“We’ll never change the name,” team owner Dan Snyder told USA Today last year. “It’s that simple. NEVER — you can use caps.” (He actually said that.)

The Redskins’ trademark attorney, Bob Raskopf, told Politico in a statement that “of course” the ruling would be overturned.

“We’ve seen this story before. And just like last time, today’s ruling will have no effect at all on the team’s ownership of and right to use the Redskins name and logo,” Raskopf said. “We are confident we will prevail once again.”

As the team sorts this all out, Twitter users have begun offering up some suggestions for a new name.

Let’s change the name from Washington Redskins to Washington Insane Clown Posse — or would that be disparaging to clowns? #NewRedskinsName

More depressing, though, are the folks who are expressing anxiety over fascism and censorship, that the Patent Office has overstepped its bounds with this decision. (It hasn’t.)

“The team’s name is racist and derogatory,” said plaintiff Amanda Blackhorse in a statement. “I’ve said it before and I will say it again—if people wouldn’t dare call a Native American a ‘redskin’ because they know it is offensive, how can an NFL football team have this name?”

Per the National Congress of American Indians’ “Proud To Be” commercial, aired during the NBA Finals, ‘The Washington Indomitables’ could be pretty badass.