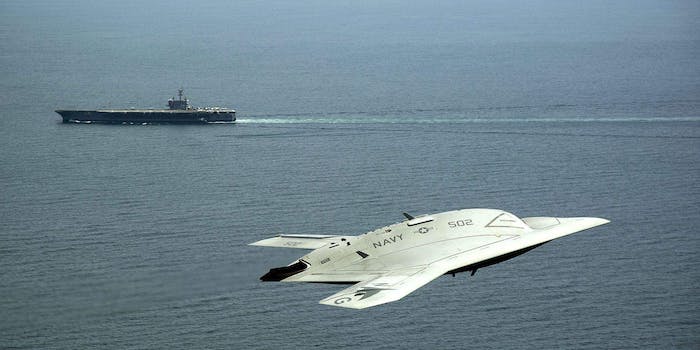 Watch the Navy’s newest stealth drone, the X-47B, in action

“For the first time, the drone operated amid manned F-18 warplanes using the carrier at the same time, a key step toward integrating such robotcraft into naval aviation,” according to Time.

Barbara Weathers, a project supervisor on the X-47B Unmanned Combat Air Vehicle (UCAV), said, “We conducted X-47B night flight deck operations to understand the human interface and suitability of the unmanned air vehicle and deck operator’s hand-held control unit in the night environment. These lessons learned will help with the development of future unmanned platforms.”

Northrop Grumman, the maker of the X-47B, shared this photo of the vehicle performing night operations on August 25.

Last year, the Navy Times reported that Secretary of the Navy Ray Mabus estimated that the X-47B would enter service in 2019.